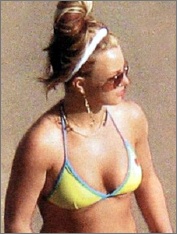 According to the cable television celebrity channel E!, one of Brit's brand-name companies owes the state of California more than $23,000 in taxes. And celebrity, even in star-crazy California, doesn't confer special tax status. If she doesn’t fork over the dough, she’ll end up owing more via interest and fees.

A California Franchise Tax Board document obtained by E! News cites Britney Online Inc., one of the troubled pop star's many name-brand companies, as delinquent in payment of $23,589.17 on its 2004 tax year earnings. In the state tax lien, the FTB warns that "further interest and fees will accrue" if the sum is not paid.

There's no indication that the state's tax interest goes beyond this one company and the 2004 tax year.

And there's no word as to whether Britney, either personally or through her businesses, might have similar tax issues with the feds. But I'll bet that now that this California situation is out in the open, the IRS is taking a closer look at all of Spears' federal filings.

The bad tax news comes on the heels of a court order that Brit pay legal fees totaling more than $400,000 to attorneys who her and her family in various legal cases.

Spears' father Jamie and a court-appointed lawyer took charge of the "Toxic" (for non-Britney fans, that's one of her songs [video here], not an editorial assessment!) singer's financial affairs after fighting for conservatorship of Britney's estate following her hospitalization for mental illness issues in February.