Television, taxes and audits, oh my!

Vidiots like me are so relieved that the writers are settled in post-strike programming is finally appearing on our television screens.

I doubt that many of the new story lines will focus on taxes, but not to worry tax fans. AccountingWeb has gone through the classic TV vault and found a couple of tax-related episodes. 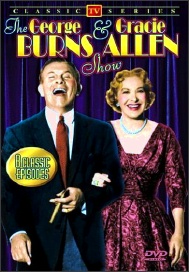 There's the George Burns and Gracie Allen Show episode in which they work with their tax accountant. While sorting through the couple's records, the tax pro wonders why Gracie has included a receipt for a $50 full-length mirror in the couple's medical expenses material.

"I bought it so my dad wouldn't catch pneumonia," explains the ditzy Gracie. "Without a full length mirror, he forgets to put on his pants."

And then we have legendary TV skinflint Jack Benny, who in a 1964 episode of his program, is investigated by the IRS. With his reputation for cheapness, a natural assumption would be that Jack underpaid his taxes.

But rather, the IRS sent an agent to Jack's home to interview him because he claimed an entertainment expense of only $3.90 on an income of $375,000.

In today's dollars, says AccountingWeb, that's a deduction of less than $26 on an income of over

Audit red flags: Yeah, there are lots of holes in the Burns and Allen and Jack Benny tax story lines. So what else is new?

TV writers use IRS situations for entertainment purposes only and rarely bother to make sure the story lines make actual tax sense.

But when it comes to real life, we taxpayers don't have that luxury. As blogged about previously, IRS audits have been steadily increasing.

That earlier post on increasing audits also looked at average deduction amounts. Stray too far from what the IRS considers a normal deduction range (per the agency's discriminant function, or DIF, system) and you could cause the tax collector to ask additional questions.

Some other audit red flags, according to Smart Money (via AOL), include not reporting all your income, claiming a loss from your small business, not having proper documentation for charitable donations and deducting a home office, although experts differ on this red flag, as noted in my earlier blog on the tax pros and cons of a home office.

You'll find many of the same warnings in these postings, but that just reinforces which areas to be especially careful about when you file.

When faced with an IRS audit I think it's important for a taxpayer to understand a couple of things. First, there are two ways an IRS audit can occur - correspondence and face to face. When dealing with a correspondence audit ALWAYS send the information requested by delivery method that provides CONFIRMED delivery. The IRS is SLOW to process incoming mail. If you are given 30 days to respond and provide information it is VERY likely those 30 days will expire BEFORE the IRS processes your response even if you respond within the required time. Lastly, remember during an audit you are entitled to representation, so hire a qualified tax professional. It will save you a tremendous amount of frustration.