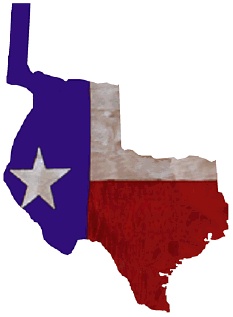 172 years ago today, the Texas Declaration of Independence was signed by members of the Convention of 1836. The Republic of Texas was born and we Texans have been, well, being Texans ever since.

Even though the hubby and I, both native Texans, were Texpatriates for far too many years, we always identified ourselves as Lone Star Staters. Introductions would be, "We live in Maryland (or Florida), but we're from Texas."

In my case, that usually was evident the minute I opened my mouth. I am proud to say that despite many years away from my roots, I never lost my drawl, y'all.

We've been back home now for a little more than 2½ years, but it's like we never left. And I do appreciate every day back here. So I make it a point to celebrate, among other things, Texas Independence Day.

In 2006, our first Independence Day back home, I blogged a bit about Texas' history and the innate combativeness of its residents.

The next year, I got sentimental and posted Bum Phillips fine letter about what being a Texan means to him and a lot of us.

This year, I'm sharing the day with some other Texas bloggers and their thoughts on this important Texas milestone.

Burnt Orange Report has a nice John Steinbeck quote about our beloved state. Something about mystique, passion and obsession.

Walking Off the Big Apple acknowledges some real Texas men and women in the post We're Not All Like Dubya. I got a special kick seeing Terry Allen's name in that list; Lubbock on Everything is the quintessential musical statement on the Texas High Plains.

The Lone Star Times has reprinted the Texas Declaration of Independence.

And I've got to include The Phog Blog for its Independence Day reference to my Texas Tech Red Raiders' upset of the Longhorns in yesterday's basketball game.

Now I'm off to make guacamole and nachos for lunch. And, like Texans everywhere, raise a glass for our state today.

Today's tax tip: If you'd like to join us here in what we consider the promised land, you might be able to get some help from the IRS. Moving costs in many cases are deductible. Details in this MarketWatch article.

Thanks, Kay, for visiting Walking off the Big Apple. Yes, I'd love a beer in Austin! I'm coming back to this site before April 15, that's for sure.