Notch up another one to the T-men. 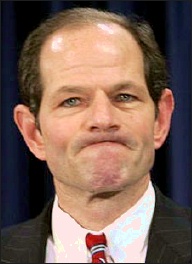 The IRS was a key player in taking down New York Gov. Elliot Spitzer, the man who made his political name battling high-finance corruption.

That's because it was the money, not the prostitute to whom Spitzer allegedly gave it, that first caught investigators' attention.

It seems that governor's "suspicious" money movement prompted a bank to call the IRS which then brought in the FBI's Public Corruption Squad. According to to ABC News, federal agents initially thought Spitzer was hiding bribes.

"We had no interest at all in the prostitution ring until the thing with Spitzer led us to learn about it," said one Justice Department official.

So this was Ashley Alexandra Dupre as the prostitute on this video with Governor Eliot Spitzer?
http://eliot-spitzer.blogspot.com/

So this was Ashley Alexandra Dupre as the prostitute on this video with Governor Eliot Spitzer?
http://eliot-spitzer.blogspot.com/