The ol' tax blog is looking this week a bit like a New York sports report. 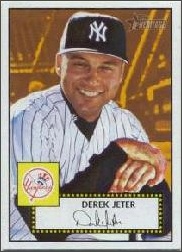 According to the New York Daily News in this gossip, not sports, item, Jeter has cut a secret deal with the state's Department of Taxation to end a probe into whether he paid enough income NY taxes.

As blogged about here previously, Empire State tax officials had questioned the MLB shortstop's contention that his legal home was in Florida, a state that attracts as many for its no-income-tax policy as it does for it warm weather.

New York officials were a bit perplexed because Jeter also had what the Daily News refers to as a "bachelor's pad" -- such a '60s term! -- on the 88th floor of Trump World Tower in Manhattan.

Apparently after seeing those details, Jeter and state officials decided to make nice. Just how nice on either side, we don't know, because the operational word in the deal they reached is "secret."

A spokesman for the New York tax department refused to comment, citing privacy issues. No one from Jeter's camp is talking either.

However, I suspect both sided are pretty happy. New York likely got a nice chunk of change from the multimillionaire's earnings and Jeter doesn't have to hassle with the state tax man any more.