Tornadoes and taxes ... too soon!

I hate writing today's blog item. I knew I would have to eventually, but it's way too soon.

I'm talking about the tornadoes that tore through the South on Tuesday. It was the worst twister outbreak in more than 20 years.

There's nothing any of us can do to console those who lost family and friends.

And there's very little we can do for those whose losses were confined to property.

But we try anyway. The quickest way to reach out is to give to a charitable group that provides assistance to storm victims. These organizations, such as the American Red Cross, are on the ground in the damaged areas right now. 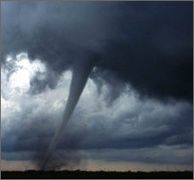 Too much, too soon: A very disturbing aspect of the tornado outburst is that it's just February. Early February.

Tornado season doesn't hit its peak until April and May. Then hurricane season arrives in June. Actually, it seems that natural disasters have thrown away their calendars. They happen any time.

And as my more worldly hubby notes, they are not confined to U.S. borders. Typhoons, earthquakes, floods. They devastate lives worldwide.

CNN has a good page (here) that contains links to the many relief organizations that offer disaster support in the United States and globally.

One of those links is to Charity Navigator. At that site you can search for a nonprofit that concentrates on projects important to you. It also provides many valuable giving tips, such as these things to consider when giving in a time of crisis:

Getting back for giving: I know that many of you have already contributed to relief efforts. And I know that you did so out of compassion.

But I must remind you that your gift also can provide you with a tax deduction on your 2008 return if you itemize.

You should get a receipt for your gift. Nowadays, most nonprofits issue documentation regardless of the size of your donation, usually in the form of a thank you note. That's a nice touch, especially in light of the IRS requirements that took effect with the 2007 tax year that you need substantiation of all monetary gifts.

Details on this IRS requirement and other charitable giving tax issues can be found in:

And Intelligent Giving's blog tells us what we already know: Giving is good for you.

This is Wendy from the American Red Cross.

Thanks for posting this information.

If you or your readers are interested in Red Cross response information, here are some resources.