Tax protesters beware: The feds are coming after you

The fallout from the Wesley Snipes trail continues. But this time the actor is not the target.

Rather, says the Justice Department, it is planning to go after individuals who might have been emboldened by the split verdict in the "Blade" star's tax evasion trial (blogged here). 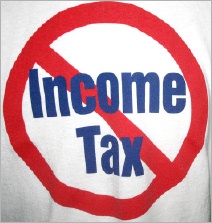 Treasury and Justice Department officials say the protester ranks are growing and now include white-collar professionals. And they are costing the government millions of dollars.

"Too many people succumb to the fallacy, the illusion, that you don't have to pay any tax under any set of conditions," Assistant Attorney General Nathan Hochman told Bloomberg. "That is a growing problem."

Hochman, the new head of the Justice Department's tax division, told the news service that his office will announce its stepped-up enforcement program next month. Details are still being worked out, but he did say we can expect to see many new criminal and civil cases against promoters of the illegal schemes and their clients.

Many reasons for protests: According to the Bloomberg report, in addition to the Snipes verdict in which he was cleared of tax conspiracy charges, the tax protester movement has been given a boost by the faltering economy and politicians' vilification of the Internal Revenue Service.

And, no surprise here, the promotion of "kooky" avoidance plans has been aided by the Internet, where many firms sell strategies online and believers encourage others to join the anti-tax efforts.

"Any kooky tax protester can put up their theories," said Jonathan R. Siegel, a professor at George Washington University's law school. "It is much easier to get their message before a mass audience."

You can read the full Bloomberg story on the coming tax enforcement activities here.

You also should check out Siegel's collection of tax protester myths here.

And the official U.S. word on such efforts can be found at this special Web page dedicated to debunking frivolous tax arguments.