Sunday is my regular shopping day and it took a bit longer than usual, thanks to the guy in front of me at the checkout lane.

No, he didn't have an overstuffed shopping cart. He wanted paper bags.

My local H.E.B. had them, but it took a couple of minutes to find them at a neighboring checkout station. And it took the bagger, who was obviously more accustomed to tossing things in plastic, a bit longer to get them open and fill them.

I didn't mind the extra few minutes. It's Sunday and I had nowhere to go but home to read newspapers with the Daytona 500 on the TV in the background.

And I appreciated my fellow shopper's environmental commitment.

I sometimes take my own shopping bags to the store, but mostly I still go with the plastic. But, in my eco-defense, I schlep my empty plastic bags back each week and drop them in the store's recycle bin.

I expect, however, that H.E.B. will soon be making its paper bags a little more accessible. The reason: A major competitor is eliminating plastic bags from its stores.

On that Tuesday, April 22, Whole Foods shoppers can have their items put in reusable bags or paper ones at the chain's 270 locations. In addition to saving the already prosperous retailer some more money, the move will generate lots of free publicity.

And that's likely to prompt other stores to follow suit. In fact, BloggingStocks reports that even Wal-Mart is phasing in reusable bags as a third option.

Taxing away plastic bags: While this latest anti-plastic trend in the U.S. is motivated by environmental and economic concerns, the ubiquitous shopping bags are being shunned in many other places worldwide in part because of tax costs. 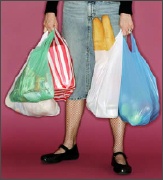 In 2002, Ireland passed a tax on plastic bags. Customers who want them must pay 33 cents per bag at the register. Within weeks of enactment, plastic bag use dropped 94 percent. Within a year, nearly every Irish shopper was toting reusable cloth bags to the market.

And German grocers have long charged a nominal fee for plastic bags.

Here in the U.S., San Francisco became the first major city to ban the use of non-biodegradable plastic bags in 2007. And down the Pacific Coast, the city of Santa Monica is considering a plastic bag ban and a paper bag tax.

But, hey, that's California. Elsewhere in the U.S., the bag battle is much less intense.

And given Americans' general antipathy toward taxes, I suspect the California cities' efforts will not spread very far.

But I also expect that since retailers are quick to copy successful practices of their competitors, we'll all one day be stowing several canvas bags in our car trunks for our grocery store visits.

I agree that shoppers need to be aware of the plastic bag issues (and there are many!). However, there needs to be some discussion about the natural resources that are used to make paper bags as well.

It's important to consider the petroleum used to make the plastic bags, but it's also essential to look at the resources used for paper bags.

Which one should we choose? Neither. Bring your own!