It's true. The Internal Revenue Service is dabbling in high culture. 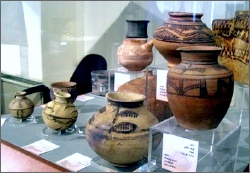 OK. It's actually investigating tax evasion scams tied to donations to Southern California museums. But doesn't it buff up the agency's image a bit to have it connected with the chichi art world?

According to a story (here) in today's Times:

"Criminal enforcement agents of the Internal Revenue Service, the Interior Department and Immigration and Customs Enforcement searched the Los Angeles County Museum of Art, the Pacific Asia Museum in Pasadena, the Bowers Museum in Santa Ana and the Mingei International Museum in San Diego, as well as a gallery, homes and storage sites in the Los Angeles area. Applications for the warrants said under the scheme, that smugglers and art dealers were selling prehistoric artifacts to Americans, who were provided with inflated appraisals. Then the art dealers arranged for the items to be donated to the museums, so the donors could take a tax deduction.

"To the average observer the operation might be dismissed as low-stakes international intrigue. According to the warrants, many of the artifacts were sold to the donors for around $1,500 each and then appraised at prices just shy of $5,000. (Above that amount the paperwork requirements on a tax return grow stiffer.) For a taxpayer in the maximum tax bracket, the savings would be only about $700 a piece."

In addition to breaking tax laws, art experts say the inflated value scheme is causing irreparable damage to archaeological sites as looters destroy them in order to obtain the eventually donated artifacts.

Average taxpayer donation inflation: While art aficionados might view the amounts involved in the investigation as penny ante, for you, me and most other taxpayers, the donation values are many times more than what we typically write off on our Schedule A when we drop goods off at our favorite charity .

But even then, donation value inflation has been a problem. The NYT story quotes a former IRS criminal investigator who notes that taxpayers often list improbably high values for used clothing or furniture donated to charities.

"It’s something a tax preparer can inflate quite easily for a low-income taxpayer and make them feel like they’re getting away with something," Burton J. Haynes told the paper.

Of course, the IRS has taken steps in the last couple of years to reduce such false deduction claims. And that brings us to today's tax tip on the various tax rules that now apply to charitable donations.

Let's start with that load of clothing you carried to Goodwill or the Salvation Army or your church. In order to claim the fair market value of those items, they must have been in good or better condition.

This change was part of the 2006 Pension Protection Act, and it was created to eliminate two problems:

Granted, the IRS still has to take your word for it, but the law also gives examiners more leeway to ask questions if they see what they deem is an usually large amount claimed on Schedule A for donated clothing and household goods.

The foundation for the donated items change was laid a few years earlier when the IRS toughened its rules on donated vehicles.

You're no longer able to automatically deduct the Blue Book value of your donated jalopy. Instead, you must take into account what the charity does with your donated auto. When you give a car to charity, the organization now has to let you know how it was/is used and the value of your gift for tax reporting purposes.

Finally, there are the new donation documentation rules that took effect with the 2007 tax year.

The IRS nows says you need written proof for every monetary gift to a nonprofit, regardless of how small or large the amount. Previously, taxpayers could substantiate financial donations in more casual ways, such as notations in check book registers or notes made on calendars when they made the gift.

Now, however, the IRS wants an official written record. This could be a canceled check, a bank or credit union statement, a credit card statement or a written statement from the charity detailing the monetary gift.

You can read more about these charitable donation documentation rules in this story.

And while the new laws and IRS regs do require some additional filing care on your part, please don't let it deter you from giving. Just consider the extra bit of your time and documentation storage space as nondeductible parts of your donation.

I was surfing through and enjoying your site for its massive amount of links to information, blogs, and resources. Thought I would send you what I am currently working on. We are editing a film right now that deals with Tax Reform. It's called, "An Inconvenient Tax." Please take a look at it, and if you want, sign up for the mailing list. www.aninconvenienttax.com It's been quite a journey so far, and it is amazing who all has agreed to be a part of this film.