A few years ago, a friend of mine, along with her husband their daughter, decided to decamp to Italy for a while. It was purely a temporary stay; they had no intentions of becoming expatriates and, in fact, are now happily re-ensconced in their upper Midwest home. 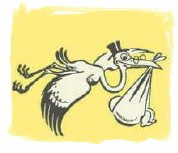 But during that European break, my friend delivered her son, George. that fact because of the note she sent announcing the newest member of her family:

"He'll probably never forgive me for having him here and ruining his shot at the presidency."

Did I mention that my friend and I had previously worked together for years in a Washington, D.C., government relations office? So I wasn't surprised that she knew of, and in George's birth announcement referred to, the rule that only a "natural-born citizen" can hold the nation's highest elective position.

Today, however, I am pleased to report -- and have done so directly to my friend -- that George might not have a political birthplace issue at all.

Military delivery: According to this story in the New York Times, this matter has already been examined in connection with GOP presidential candidate John McCain.

McCain was born on a military installation in the Panama Canal Zone, where his mother and Naval officer father were stationed. His current campaign staff, as well as those during previous presidential attempts, believe that by virtue of being born to American citizens on a U.S. controlled facility, McCain has no problem with the "natural born" requirement.

Or, as  Senator Lindsey Graham (Rep.-S.C.), puts it, "He (McCain's father) was posted there on orders from the United States government. If that becomes a problem, we need to tell every military family that your kid can't be president if they take an overseas assignment."

The story also cites some politicians who were born abroad with no mention of a military connection and who were assured of their eligibility to run for president. But it also notes others who were told they couldn't aspire to the Oval Office because of where they were born.

Lawyers familiar with the issue, reports the Times, say that in addition to confusion about the provision itself, there's also "uncertainty about who would have the legal standing to challenge a candidate on such grounds, what form a challenge could take and whether it would have to wait until after the election or could be made at any time."

I'm not a McCain supporter, but I think his birthplace is a total non-issue. In fact, I think anyone who is born outside this country but whose parents are U.S. citizens should be eligible to run for president, no birthplace questions asked.

So in 30 or so years, young George, sign me up for your White House campaign!