Recession tax legislation: Does it work?

Suddenly, the economy is the big topic in the nation's capital.


Welcome to our world, D.C.

Economic concerns have dominated the lives of most of us out here in the rest of the country for quite a while.

But now, presidential candidates are talking loudly, if not particularly coherently, about it. Tuesday, prompted by fear U.S. economy is faltering, the Federal Open Market Committee implemented an emergency interest rate cut. 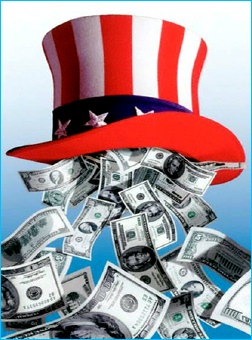 And Dubya and Congress are considering once again sending us taxpayers a rebate check (blogged about last week here).

While you can never safely say the involvement of politicians is a good thing, this is one of those rare times when a lot of folks are in favor of the action.

But is the rebate idea really a good one?

The panel will continue listening to testimony tomorrow. You can read the statements made on Tuesday here; the witness list for Thursday's hearing is here.

A look back at tax rebates: In conjunction with those hearings, the Joint Committee on Taxation has produced an "Overview of Past Tax Legislation Providing Fiscal Stimulus and Issues in Designing and Delivering a Cash Rebate to Individuals."

On the individual tax side they include:

A tax rebate, which the JCT report calls a "lump sum" transfer of income form the government to the taxpayer, "can act as a fiscal stimulus if taxpayers respond to the increase in income by increasing their consumption."

And that, my friends, is the gazillion dollar question.

The report goes on to say that studies of the previous lump sum transfers "have generally found that the rebates provided modest stimulus to consumption."

But they sure added greatly to political posturing, especially in an election year.

Cynical? Me? I prefer the term "realistic."

Missing the most willing to spend: Economists are quick to note that a major issue with rebates is that they go to taxpayers.

Sounds fair enough, right? But a lot of folks who would spend the money to help jump start the economy aren't taxpayers.

No, they're not scofflaws. They simply don't make enough to have to file returns. Since they're not in the system, they won't benefit from the rebates.

Case in point, my mother. The bulk of her income is from Social Security, so she hasn't had to file a tax return in years. Because of that, she didn't get that $300 rebate back in 2001. And trust me, the woman who's never found a pair of shoes she didn't like would definitely have spent the government check as soon as she got it!

The hubby and I, on the other hand, banked our tax windfall back then. We'll likely do the same this time.

Maybe that's not the economically patriotic move, but for us, it's the fiscally prudent one.

And just like politics, where everything is local, we'll definitely be thinking about US and not necessarily the USA when we get our tax rebate check.

Herbert Hoover jacked taxes through the roof, but how often do people even know enough history to consider whether that contributed to the Great Depression?

I keep hearing that WWII got us out of the great depression because it destroyed goods thus stimulating demand. This is an odd line of thought. Investment, not spending, is what creates jobs and stimulates economic growth. And bad investments (and there were many frauds exposed in the pre-depression crash) detract from growth.

There are a lot of unions afraid for their paychecks in these times (not to mention corporations and banks eager for an oddly Democrat led bailout that puts the Iraq war costs to shame.) Few are in favor of this, but it remains to be seen whether they'll vote on it.

In 2001 I paid mine towards my debt repayment, so I could keep my credit card going. Today, if I were to even get one (I owe the IRS), I would probably save part of it, and apply part of it to my debts (no credit card to charge this time - I am 100% cash).

"While you can never safely say the involvement of politicians is a good thing..."

Boy, you said a mouthful there! Gov. Huckabee's FairTax ( http://snipr.com/fthuckabeeonirs ) will go along way toward removing the hand of government from behavior control re-directing it toward efficient generation and collection of taxes in a manner that aligns it with economic growth instead of being pitted against the entrepreneurial freeholder striving to build a business, adding employees along the way.