Home Table of Contents Tax Tips Credits Deductions Refunds State Taxes Politics/Laws Tax Terms Archives
Uh oh! Audits are up
What a bargain! Or is it?

Is a mortgage insurer crisis imminent? 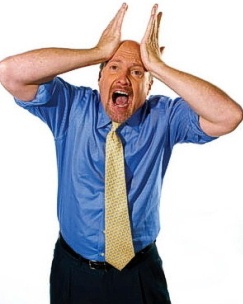 Jim Cramer is a little annoying.

But on Friday, on the Administration's possible stimulus package caused a bit of pause in our household.

Speaking on Hardball -- yeah, that's one of the joys of working from home; cable TV in the afternoon -- the "Mad Money" host scoffed at just how much of a boost tax rebates of $800 per person (twice that for joint filers) would do the economy.

A few more bucks to buy Nike shoes or a new suit at Men's Wearhouse is "crazy," said the voluble Cramer.

I tend to agree with him. This is a political Band-Aid. An election-year effort to give some cover to candidates who might be associated with a faltering economic strategy that has depended too heavily and for too long on consumer spending.

Market crash coming? But Cramer's assessment of the rebate proposal wasn't what really caught the ear of the hubby and me. It was his prediction of a huge stock market downturn -- 2,000 points -- as soon as the companies that insure mortgages and mortgage-backed securities fail.

That collapse could come in two to three weeks, according to Cramer.

He called the struggles of the insurers "the linchpin of what's wrong." Their impending collapse, he said, is what's hurting the financials so much and causing the paralysis in the market.

So he's proposing the federal government step in and buy the failing insurers and then pay 50 cents on the dollar to the banks for the $500 billion in insured loans.

Otherwise, when the insurers tank, the banks get nothing and the market will dive, possibly as much as 2,000 points by Cramer's analysis.

The proposed consumer-based rebate plan, along with tax incentives for businesses, could cost as much as $145 billion. Cramer says Uncle Sam should spend a bit more -- $250 billion under this pennies on the dollar plan -- to solve the real economic problem.

OK, I don't know these insurers -- MBIA, Ambac Financial, PMI Group -- and what their financial status is right now.

And Cramer's been sounding this same alarm for a while; check out his blog item from last November.

Plus, the guy's whole wild man persona doesn't instill the most confidence.

But, as someone who has most of her (and hubby's) assets in equities, the mere mention of a 2,000 point market drop is enough to get us thinking about where we could get a new mattress to stuff our money once we cash out.

Additional coverage: You can watch the Hardball segment here and read a version of Cramer's remarks in this Mad Money Mad Cap blog post.

Other blog reaction to Cramer's proposal can be found at Mortgage Insurer Bankruptcies to Tank Market?, Jim Cramer Predicting 2000 Point Stock Market Drop and Could the Mortgage Insurance Business Implode?

And today's New York Times talks to economic experts about how effective such one-time tax rebates really are in sparking a sluggish economy. Story here.

Tax relief for stinking stocks: no fun watching your portfolio's value evaporate. The hubby and I have experienced that sinking feeling a couple of times over the years in previous market tumbles.

In those instances, we gritted our teeth, kept repeating "we have time to recover" and toughed it out. My earlier mattress comment notwithstanding, that's what we'll probably do, for the most part, if Cramer's crash prediction pans out.

If, however, some stocks are just not worth keeping, the one consolation is that we should be able to take some tax advantage of the losers. You generally can use capital losses to offset any capital gains.

And when you have more losing transactions than profitable ones, after you get a new broker you can use up to $3,000 of your losses to reduce your ordinary income.

Details on how losing stocks can pay off at tax time in this story.

The worth is still ahead of us.. I believe that people have to get their money of the stock market as soon as possible.

Though it is a great time for people who become incredibly reach by buying the stock cheap.

Yes, the problem is bad for the insurers. These were solid companies when they stuck to their knitting by insuring municipal bonds. But, like many on Wall Street, they found easy money insuring the CDOs with subprime junk in them. They drank the kool aid provided by the rating agencies that these instruments were AAA rated.

Now these companies face bankruptcy or certainly could if more of the subprime debt defaults. What is even worse is every muni bond that has purchased insurance through these companies must downgrade their paper as the ratings for these insurers drop. A state government could claim AAA rating because it piggy backed the AAA rating from the insurers. Without the insurance the munis would have a much lower rating, which means the government would have to pay higher interest. Now they face this very situation.

Rather than have all your assets in stocks, you might want to add some other asset classes with equity like returns, but with a lower correlation to stocks - commodities, REITs, international stock (large and small cap), and even some bonds. If you develop a diversified portfolio with more than just US stocks, you can actually add 25% bonds and still get market returns with much less volatility.