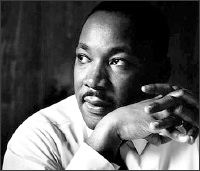 But today is Dr. King’s actual birthday (he would have been 79 this year), and that, too, deserves mention. Plus it's an opportunity to pass along some MLK-related tidbits that might take a bit of planning.

If you opt to spend Jan. 21 out and about, then be sure to check out Family Travel's look at civil rights landmarks. Blogger Sheila Scarborough (one of my Austin area neighbors!) suggests several locales that will help, in a real-life way, illuminate our country's struggle for social justice.

If you're more inclined to stay home on the MLK holiday, tune into Turner Classics Movies.

The cable channel will celebrate the day with a tribute to the indie filmmaker Charles Burnett. His films that will be highlighted on MLK Day include his acclaimed first feature "Killer of Sheep," along with "The Horse," "My Brother's Wedding," "When It Rains" and "Several Friends."

Other films with African-American themes to be shown on TCM that day include "The Jackie Robinson Story," "Intruder in the Dust," "Odds Against Tomorrow," "Paris Blues," "Edge of the City" and "Raisin in the Sun."

Taxes and social issues: It's no secret that the tax code is used to shape social policy (and blogged about previously here).

One such tax provision is the Earned Income Tax Credit (EITC). Enacted in 1975, it was designed to encourage lower-income individuals to work by helping offset the Social Security taxes withheld from paychecks.

It is generally seen as one of the largest anti-poverty tools in the United States and has broad bipartisan support; lawmakers have expanded the credit with each major tax bill since its creation.

Many states also have their own EITC programs. More information is available at StateEITC.com and TaxCreditResources.org.

Federal EITC outreach: The EITC, however, is somewhat complicated, especially at the federal level. That often leads to honest mistakes in claiming it. And sometimes, less scrupulous folk claim the EITC even though they aren't eligible; others operate EITC mills that file returns for others to illegally claim the tax break.

For the last couple of years, the IRS has made an effort early in filing season to get the word out about the EITC. The agency wants taxpayers who can legitimately claim the credit to do so; and, of course, it wants to dissuade those who are improperly claiming it, either by mistake or as part of a tax scam.

This year, Jan. 31 is EITC Awareness Day. But you don't have to wait until then to see if you or someone you know might qualify for this tax break.

This special IRS Web page has a collection of information about the EITC, including a link to the EITC Assistant. This interactive tool will help figure out if you're eligible for the credit, as well as determine your correct filing status, whether your kids meet the qualifying child tests and will estimate the amount of credit that you may receive.