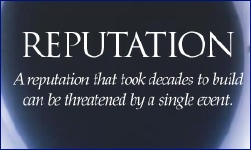 Remember when your mom told you how important your reputation is? If you screw up, mom warned, it'll take a long time, if ever, for you to recover your good name.

It seems that mom's advice, as is usually the case, is dead on. And it applies to governments, too.

D.C. déjà vu: Let's start in the United States. A couple of weeks ago, some Washington, D.C. tax office employees were charged with using their positions, over seven years, to steal $16 million (maybe more) from the national capital's coffers. If it doesn't ring a bell, you can read my earlier item about the case here.

The incident is now conjuring disparaging images of D.C. that officials thought they had long ago put to rest. Specifically, the city is started to be seen again as it was during the tenure of quintessential party (and we ain't talking political party here) mayor, Marion Barry.

The hubby and I lived in the D.C. area when the flamboyant and combative Barry was in office. Trust me, the picture he painted of that city is not one any municipality wants. This Washington Post story sums up his lowest point.

Now, according to a story in Saturday's New York Times, the tax office fraud has "tarnished anew" D.C. municipal government's reputation. Read all about the city's newly troubled rep here.

The competence of Brown's five-month-old government is being questioned in the wake of the British tax agency’s loss of computer disks with personal and financial information on about 25 million Britons.

The country's top tax official has resigned, but no one has an explanation as to what happened to the disks. They disappeared en route, via an internal mail service, to a government audit office. The delivery was not being tracked and it was three weeks before anyone noticed they were missing.

Brown apologized in Parliament last week for the "inconvenience and worries caused to millions of people." It hasn't, however, done his public perception much good.

Details on Brown's tax and other troubles can be found in this New York Times story.