I'm still on a sugar high from munching on last night's excess candy -- honest, we don't overbuy on purpose! It just seems to happen! -- so I'm continuing with the Halloween theme for a bit longer.

Plus, this is just too silly of a tax not to talk about.

First, the bad news. This Halloween, the Iowa Department of Revenue decided that pumpkins were getting an unfair tax break.

Now the good news. The pumpkin tax is on hold.

Cooking up a silly tax: According to an article by John A. Swain in Tax Analysts magazine, the Iowa Department of Revenue this Halloween instituted a pumpkin tax.

Previously, purchase of the squash was tax-free because it is a food stuff. But, writes Swain, "It has come to the DOR's attention … that Iowans are not eating the vast majority of pumpkins they buy. Instead, get this, they are carving scary faces on them." 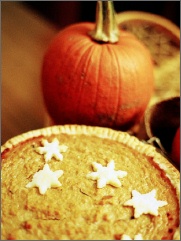 So Iowa told its pumpkin-carving citizens that their use of the orange edible as jack-o-lanterns would mean they owe sales tax on the purchase. status remains if the squash is "specifically of to be used to make pumpkin pies and are advertised in that way;" they are purchased with food stamps; or "the purchaser evidences their intent to use them as food by completing a sales tax exemption certificate stating they are bing purchased for human consumption."

You can read more about the Iowa's idiotic pumpkin tax and all its possible implications in Swain's article (courtesy of TaxProf).

Change of heart: A search of the Iowa Department of Revenue Web site today, however, reveals that tax officials had a change of heart.

Or maybe they were feeling a little silly. Or possibly, some of them opened their front doors this morning to find taxable pumpkins smashed on their porches.

Whatever the reason, the Web site now declares Iowa Tax on Pumpkins Put on Hold.

The official reason for the policy change is that:

"[N]not all sellers of pumpkins have become aware of the change in position by the Department. The Department has decided to revert to its prior policy of exemption. The Department will continue to review the issue and seek to make any changes through administrative rule making with opportunity for input by the public and the Legislative Rules Committee. Taxpayers who paid sales tax on pumpkin purchases can apply for a refund with the Department."

Let's hope Iowa tax officials prove they don't have squash for brains and permanently reinstate the tax-free status of all pumpkins, regardless of how they're eventually used.

And let's get real. How much money would a pumpkin tax really bring in?

Another pumpkin proclamation: In searching for info on the now squashed, at least temporarily, pumpkin tax, I ran across another tidbit.

There's a link from the state tax page to a fact sheet from the Iowa Department of Public Heath on November's featured vegetable, the pumpkin.

And, like a good state agency colleague, it underscores the Revenue Department's original ruling with the pumpkin page headline, "Wash. Cook. Eat."