Praying, or not,
for financial help

Oh lord, won't you buy me
a Mercedes Benz?
My friends all drive Porsches.
I must make amends.

If you've already got a German luxury car, then you're probably not going to be joining Janis Joplin in seeking divine help for material possessions or anything else.

That's one of the findings of the Pew Global Attitudes Project.

The survey found a strong correlation between a country's religiosity and its economic status. In poorer nations, religion remains central to the lives of individuals, while secular perspectives are more common in richer countries.

Except in the United States. Other notable deviations from this pattern include predominantly Muslim, oil-rich countries of the Middle East. 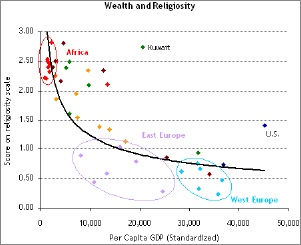 Click here for a larger view of the above graphic.

This latest look at religion and money (among other global issues) was released last month. But it reiterates data The Pew Research Center collected in 2002.

Five years ago, the organization reported that "Religion is much more important to Americans than to people living in other wealthy nations. Six-in-ten (59%) people in the U.S. say religion plays a very important role in their lives."

In addition to looking at religious perspectives, the 2007 survey also measured global opinion about contemporary social issues, such as immigration, trade, politics and gender issues. You can read a summary of the findings here. For a full PDF version of the report, click here.

OK, now the big question. Did people start losing their religion as they got wealthier, or did the money come because they stopped focusing so much on the spiritual side of life and instead devoted themselves to making moolah?

The answer is probably a combination of both. It's included on this "essentials" collection of her songs.

And the song's namesake automaker has used it in recent years to prove that Germans do have a sense of humor.

Mercedes-Benz (the official car name is hyphenated; the song title isn't) took the anthem that denounces materialism (lyrics here) and in 1995 and 2007 used it in its U.S. television commercials.

Yes, religion is important in my life, unfortunately it is other people's religion since I don't have one but am unlucky enough to currently reside in Jesusland