Neil Downing, who writes the MoneyLine column for the Providence Journal, notes that it's strictly a business tax issue, but that the ultimate resolution could have far-reaching implications.

When a Rhode Island shopper buys something that's subject to the state's sales tax, the purchaser pays the retailer for the cost of the item, plus the sales tax. The retailer then forwards the tax to the state.

But what if the merchandise is purchased using a so-called "private label" credit card and the customer then doesn't pay the credit card bill? Does the retailer get to claim a refund from the state for the sales tax that the business already paid but for which the seller was stiffed by the nonpaying customer?

Home Depot says that in these cases, it should receive a sales tax refund.

The usual tax collection/remitting process: Retailers typically treat instances of unpaid transactions as bad debts, and claim a refund of the sales tax on these purchases that it handed over to the state. 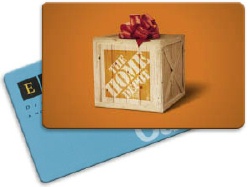 The logical conclusion, at least from the state's perspective, is that the credit card issuer, not Home Depot, can treat the transaction as a bad debt.

And because the credit card issuer isn't a retailer, it doesn't qualify for a refund of the sales tax paid, contend the state's lawyers.

The case, which began in February 2006, is now in the hands of a District Court judge in Providence.

"Should Home Depot win," writes Downing, "it could open the floodgates for refund claims by other retailers. And Rhode Island which faces a budget deficit for the current year and a steeper deficit for the coming fiscal year would have to find a way to pay."

Downing's full column (here) has more case details, as well as recounts some similar cases in neighboring states that could affect the judge's decision.

The state should not get any free money from people who stiffed anyone. Fraud, theft etc. is what the original purchaser did, it might have been called a sale at that time but it wasn't. So the retailer or credit card company is already out the merchandise, because in the end the credit card company probably stiffs the retailer or if it is a line of credit from the stores 'issuer' then the retailer still gets stiffed some how I think. I work for a major retailer so I'll disclose that but not high enough to really care!

Just doesn't seem fair to pay an additional 7% on top of what you already lost just because the state is afraid of losing 'gains' they are getting from somebodies theft /ill gotten.