I agree with Kevin Cowherd of the Baltimore Sun: "Cranberry sauce should be what it's always been: a little jellied log that plops out of the can with the indentations still etched in it, the way God and your sainted grandmother intended it to be." 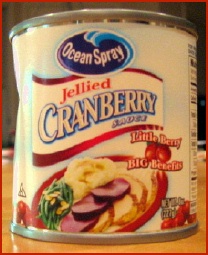 So one of the many things I'm thankful for this Thanksgiving is that my local H-E-B grocery store had small cans of Ocean Spray jellied cranberry sauce. The hubby is not a cranberry fan, so the smaller, 8 ounce size is preferable to the containers twice that size.

Yep, that's my can there, complete with the dent on the side. I hope it doesn't cause problems when I slide it out onto a plate.

But at least this year, I'll get to do that since this small can is the old-fashioned style; that is, I can use the can opener to take off both ends and then easily push the sauce out onto a serving dish. Last year, I could only find the larger cans and they were made differently. Specifically, the bottom of the can was rounded and couldn't be opened.

As I recall, I was not alone in complaining about last year's can changes. Naturally, Ocean Spray expressed concern about upset customers, but I'm not sure the company did anything about it. Its 16 ounce cans might be the same this year; since I found the smaller ones on the shelf, I didn't look any further.

Tallying up turkey day: The American Farm Bureau Federation says that menu items for a traditional Thanksgiving dinner -- turkey, stuffing or dressing, cranberries, pumpkin pie and all the trimmings -- will cost more this year.

Based on those figures, it looks like our local groceries are a bit pricey. Since it's just the hubby and I at the dinner table, I bought a small turkey breast that cost around $9. Some fresh squash and zucchini for the side dish was about $4.

The hubby made the traditional pumpkin pie last night. The ingredients ran about $6.

In a little while, I'll make the dressing, using my grandmother's recipe. Since I'll use leftover cornbread and seasonings I have on hand, I've got no cost estimate for it, which is fitting, since the dish truly is priceless.

And the small can of cranberry sauce was 89 cents. To be honest, it wouldn't really matter what it cost (within reason), since it's one of these things that I have to have to make my Thanksgiving dinner complete.

Apparently, it's a good thing we have ham for Christmas. It doesn't require cranberry sauce, which probably will be much more expensive in a few weeks.

According to this Wall Street Journal story, the Bounty of the Bog Gets Pricier because of growing season weather issues and more consumer demand. Similar stories are posted at this CBS affiliate in Chicago and the New York Times blog Well. 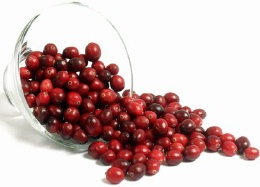 A few cranberry facts: More than 94 percent of Thanksgiving dinners include cranberry sauce.

It takes 200 berries to fill a standard 16 ounce can of manufactured cranberry sauce.

Cranberries are one of only three native American fruits. The other two are blueberries and Concord grapes.

You can find more cranberry facts, including how come they end up floating in bogs when they grow on vines, at Health News Digest and Food Reference.

Well, the first football game of the day is about to kick off, so it's time to hunker down in my recliner. I'll take a break to put the turkey on and make the dressing so that the hubby and I can eat at halftime of the Cowboys-Jets game.

Y'all enjoy your dinner and cranberry sauce, whether from a can or homemade. And have a great holiday!