Nearly of us filed out taxes electronically this year, breaking the record set last year.

As the table below shows, that's pretty much been the pattern since the IRS began accepting and then encouraging taxpayers to e-file. 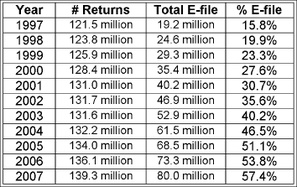 The IRS reports (IR-2007-185) that the exact number of e-filers for the 2007 tax season, which officially closed out on the extension deadline, was That's about 9 percent more than filed electronically the previous year.

This year, more than returns were e-filed by taxpayers themselves, compared to such tax do-it-yourselfers in 2006.

But despite our tax-filing independence (or, rather, our dependence on tax software), tax pros have little to worry about. More than returns were e-filed by paid preparers, up from nearly the year before.

Direct deposit also sets record: The continues to roll into other tax parts of our lives. According to the IRS, more people this year opted to have their tax refunds directly deposited than ever before.

For the year to date, the IRS reports that it has directly deposited refunds, up from last year.

And in less than two months, 2008 will be here and we can start trying to break those tax records yet again!