That headline is my admittedly weak attempt to textually relate an echo. Why? Because when we were in the canyon below yesterday, the echo effect was great.

That's Santa Elena Canyon, in the far southwest section of Big Bend National Park. The wall to the right is Texas; to the left, Mexico. 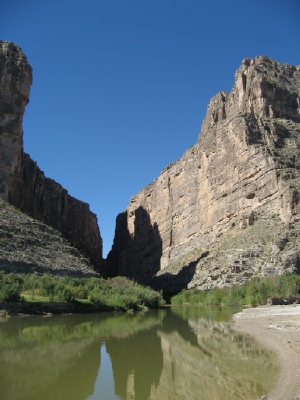 The terrain here along the Rio Grande River is nice and flat, unlike the place up-river where we stopped on Thursday when were driving to the park. There the bank fell off about 10 inches, but I was determined to put my toes into the waters dividing Mexico and the United States.

I don't have any pictures of that because the hubby, who's lived with my clumsiness for 25-plus years, uttered these words of encouragement: "If you start to fall, toss me the camera."

Instead, I gave it to him before venturing a few steps into the river. And while both of us stepped into the Rio Grande at Santa Elena, I didn't take any shots because (a) we both had hiking boots on and (b) to be honest, I was so impressed with the canyon, I forgot.

The reason we had the boots on was because, as this next shot shows, we walked the canyon trail. It's a bit steep, but as you can see from this shot, well worth it. 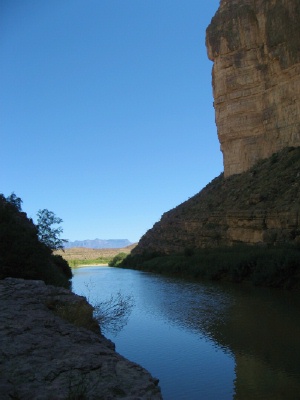 After resting for about half an hour, we headed down. And this final photo is looking back at Santa Elena from a few miles out. 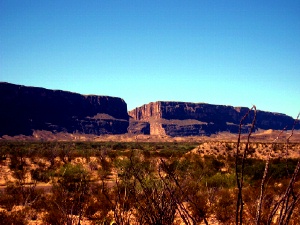 I'm sore today. My minimal walking of our own hilly neighborhood in suburban Austin was not an effective training regimen for the many grand canyons of the Big Bend (we walked into another, much smaller, one formed by volcanic ash; photos of that to come next week).

But a few aching muscles is a very small price for such vistas.

Vacation money tip: Whenever possible, the hubby and I stay at hotels that have mini fridges in them. That's the case here at the Chisos Mountain Lodge.

Then we buy a gallon of milk and a box of cereal and, voila!, breakfast for the two of us for the week costs us around $10.

If we'd eaten in a restaurant, that ten spot would have covered the day's first meal for just one of us … and for just one day!

Not to mention that you can buy snacks, sodas and the like in a supermarket and not resort to the money guzzling vending machines in the hotel lobby.