It kind of sneaked up on me. I'm used to it being around the 12th, the original date before it, like everything else, got shifted to the Monday holiday system. So I was thinking it would be next week until I flipped the calendar page. 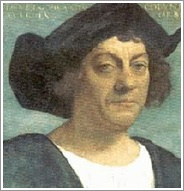 As we all learned in school, Christopher Columbus accidentally discovered America. He was looking for a direct ocean- going route to Asia so that European merchants could more easily obtain the many goods that shoppers of the 1400s so wanted. Hmmm. Some things truly do never change.

And while Chris' travel didn't go as planned, it still worked out pretty well. A lesson we all can embrace when life leads us down an unexpected detour.

So why, other than the fact that today is the federal holiday celebrating CC's voyage, am I blogging it? Because like everything else, be it centuries ago, today or in the future, money was (or will be) involved.

Obviously, the aforementioned commercial value of the spices and other products were the impetus for Columbus' voyage. And to go in search of a more direct route to them, he had to ask for money, the late middle ages' version of getting a small business loan.

In this case, though, it literally was the Royal Bank.

Spain's King Ferdinand and Queen Isabella rejected a plan Columbus proposed in 1486. But so that he wouldn't take his idea to another monarch, the royal couple gave him an annuity of 12,000 maravedis (about $840). Three years later, they also provided him with documentation so he could get free food and lodging in any Spanish municipality.

Original venture capitalists: But Chris really, really wanted to sail, so he eventually started shopping around for other funding sources.

In January 1492, he was just about to head to France with his plan when Luis de Santangel stepped in and convinced Queen Isabella to underwrite Columbus' voyage.

Actually, it seems that Santangel was one of the earliest recorded venture capital angels. Apparently, Luis contributed much of the money for the journey from his own pocket, along with other cash he borrowed, so that Isabella wouldn't have to pawn the crown jewels.

So today we in the United States celebrate Columbus. And I'd like to thank Chris, Isabella and Luis for their belief in the journey, willingness to undertake it, generosity in financing it and the skewed navigational skills of the crew of the Nina, Pinta and Santa Maria!

You can read more about Columbus and his voyage at this History Channel page. There you'll find links to a quiz and several videos.

But you won't find the video below. Courtesy of Astro7x and YouTube, it gives us a look at what might have happened when the triumphant Columbus attended his 20-year high school reunion. Enjoy!