The Pope is still working on his encyclical regarding the evils of tax evasion (blogged here). Meanwhile, the European Commission has asked the Italian government to explain a tax break it provides the Catholic Church. 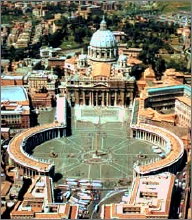 Since 2005, the Church has received a property tax exemption for buildings that house various operations. alone, the count is and

The Church's estimated tax savings? British pounds. That's in U.S. dollars, according to OANDA.com currency conversion rates as of Sept. 4.

The European Commission revealed last week that it has been asking the Italian government for information on the tax advantages it provides the Catholic Church. There now are indications, according to various news reports, that the Church is willing to give up some of the breaks.

Details on the EU inquiry and subsequent debate it has generated in Italy can be found in articles in the International Herald Tribune, Christian Today and EUbusiness.com.

My very, very bad! I typed in the three extra zeros in the conversion calculator, so I have billions in Pounds converting to dollars, which is where I got the TRillion. But I should have caught it. No more nearly 2 a.m. posting for me! Or at least triple checking when I do!

You should always double-check your calculations before submitting (be it tax forms or blog post)!