I know I've been a bit Francocentric of late, what with the French tax collector's brain issues and the less-thought approach by the country's new president. And, of course, there was the Tour de France mention earlier today.

In "The Hedge Fund Class and the French Revolution" in today's New York Times, Ben Stein questions why we are sitting still for tax laws that "allow for favorable tax treatment for hedge funds if you have good enough lawyers," as well as "for private-equity managers to receive capital-gains treatment for what is clearly money management, not risking their own capital."

Many of remember Stein from his cable game show, Win Ben Stein's Money. Or for his brief but memorable appearances in Ferris Bueller's Day Off (Bueller? Bueller? Bueller?) and television's The Wonder Years (tyto alba).

But he's also a lawyer, economist and was a speech writer for presidents Richard Nixon and Gerald Ford. (His bio notes that he did not write the line, "I am not a crook.") So Stein brings some pretty good credentials to discussions of tax policy.

In today's article, it's not just his money that Stein's concerned about. He writes, "[T]he mark of a great society is that its laws approximate morality and fairness. Is this really what we have in the tax code now? If so, fine. If not, why are we not changing it?"

He goes on to challenge Congress to "take notice of a mammoth inequity in taxation during wartime and make the tax on private equity and hedge funds approximate the treatment of other highly paid people -- or it can continue down the road to the Bastille."

We the lazy people: While I would like to think that Congress will deal with the many inequities of our tax code, I'm not optimistic.

My skepticism comes primarily because I have even less faith in the public that must demand substantive and fair tax changes from our leaders. 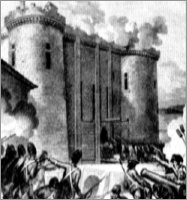 While the French storming of the Bastille back in 1789 shifted the country's revolution into high gear with the full-bore involvement of the country's working class, I don't know if enough of us can tear ourselves away from American Idol or Wii or iPhone or, yes, the Internet, to demand any equitable accountability, much less real change.

We are, after all, a nation where more of us vote for reality show contestants than for the president of the country. Heck, I suspect that if we were settling the United States nowadays, a wagon train would get to Ohio and the westward bound travelers would say, "Hey, this is far enough. Let's just stop here."

Today we idolize the rich and famous. And as part of that adoration, we have an inexplicable willingness to let the wealthy get away with all sorts of things.

Much of that attitude seems to be based on the absurd belief that someday we're going to be wealthy, too, and then will be able to abuse the system ourselves. So, goes the thinking, why rock the boat that we're hoping we'll climb into via a TV show competition or lottery win?

Let's just hope the boat doesn't sink from the weight of all that tax-favored money before then.