I used to work with a woman who, like the hubby and me, was a fan of 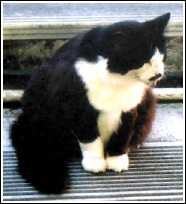 felines. Every tax-filing season Tracy would reiterate her dismay that she couldn't claim her cats as dependents on her 1040.

I certainly sympathize and empathize with Tracy's point of view. But, tax laws notwithstanding, any cat person will tell you that dependent isn't a word typically associated with these headstrong animals.

Neither can they be classified as "exhibits," at least not the six-toed variety that live in Ernest Hemingway's former home in Key West.

Officials of this funky town at the farthest reaches of Florida's boundaries have exempted the Hemingway Home & Museum from a city law limiting the number of domestic animals per household to no more than four. The ruling was necessary because the U.S. Department of Agriculture had claimed the Hemingway abode, home to around 50 felines, was an "exhibitor" of cats and therefore needed a special license.

All of the cats in question are descendants of a six-toed purr-ball given as a gift to the writer in 1935. Although some of the kitties have just five toes per paw, they all carry the extra-digit gene.

I agree with Key West officials. The cats aren't exhibits at the Hemingway abode; they simply live there.

Obviously, no one at the USDA has ever had a cat. No feline would ever deign to be a mere showpiece or follow the constraints required to qualify as an exhibit.

The hubby and I have visited the Hemingway House a couple of times and, having been well trained by our cat, got a kick out of the way the cats are in total control of the house and its grounds. You can get an idea of their lifestyle in these photos.

The Key West City Commission understands the felines' unique role at the residence, citing them as "an integral part of the history and ambiance of the Hemingway House."

"The cats reside on the property just as the cats did in the time of Hemingway himself," continues the new city ordinance. "They are not on exhibition in the manner of circus animals. ... The City Commission finds that family of polydactyl Hemingway cats are indeed animals of historic, social and tourism significance."

And this incident has gotten me thinking about a couple of things.

First, note to USDA: Quit worrying about the Hemingway cats and concentrate on what foreign material is in our imported human and pet food!

And secondly, I definitely have to get a copy of the latest Hemingway Review, cited in this earlier item, and see if, in his tax-inspired writings, Papa ever pondered the tax dependency status of his special house mates.

Say "cheese" (and mouse), Kitty: About the black-and-white cat in the photo at the top of this post. His name is Charley Chaplin (courtesy of his little mustache), one of the Hemingway Home residents who greeted us during our 2004 visit.

I have some more photos, but this was the clearest of the lot. All of the other cats I snapped were lounging under trees, meaning they were in shadow.

And, true to my opening comments, I couldn't entice a single one to pose for my camera!

I raise polydactyl cats. Eight toes is not unusual. They usually acquire one more toe with each succeeding generation, maxing out at nine toes before they begin having problems walking.

i have some with 8 on each paw, how unusual is that?