The new French leadership suggests the country quit thinking so much and instead work more.
To reward less thoughtful activities, the government is proposing lower taxes, especially on the wealthy. 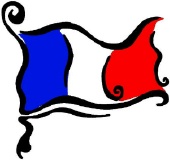 That approach, according to an article in today's New York Times, is not going over so well with many in "the country that produced the Enlightenment, Descartes’s one-liner, 'I think, therefore I am,' and the solemn pontifications of Jean-Paul Sartre and other celebrity philosophers."

But such protests aren't swaying President Nicolas Sarkozy (whose driving force, says the paper, is doing rather than musing) or his administration.

Last week French Finance Minister Christine Lagarde, in addressing the National Assembly, cited Alexis de Tocqueville "Democracy in America" and said the French should work harder, earn more and be rewarded with lower taxes if they get rich.

If this political trend continues, France is on the fast track to becoming America's new best friend, which would eliminate, at least for a while, the need to rename a favorite U.S. snack "freedom fries."

I am from France but have never actually worked or paid taxes there. It's about time someone says out loud what everyone's been thinking.
French people are too assisted, and need to get of their butts, stop complaining and asking for aids and assistance and start working.

(I would hate to have to order freedom fries again ;) )