If you're an e-shopper of a certain age, you probably remember the early days of It was new, it was exciting, and there were lots of items that you just couldn't find down on Main Street.

Even better, in almost every instance, you didn't have to pay sales tax on your electronic purchases.

State revenue departments were soon demanding their portions of revenue from online sales. The determining factor was whether a company had an actual physical presence in the state.

That means if you're looking for a particular scented candle and your local Yankee Candle shop doesn't have it but it's available at the company's Web page, you pay whatever your state's sale tax rate is when you e-buy. 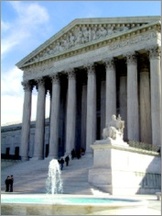 This principle, known as the nexus requirement, was firmly established by the U.S. Supreme Court's decision in Quill v. North Dakota. In that 1992 case, the Justices ruled that a company must have a physical presence in a state in order for that state to collect sales and use taxes.

But now, Quill and the companies that operate under its guidance are under attack by West Virginia and New Jersey tax collectors. Officials in both states have taken the position that actual physical presence isn't a requirement for the collection of income and franchise taxes.

Instead, the states are demanding taxes from businesses that have an activity which they say constitutes a "significant economic presence" in their states (credit cards services in the case of WVa.; licensing of women's clothing for NJ). The state tax officials argue that economic connection is sufficient grounds for assessing taxes on a company even if it doesn't operate any branches within their borders.

And the Supreme Court recently decided not to hear arguments otherwise.

That nondecision essentially allows the states to continue to assess sales taxes on their new, more encompassing terms.

The expectation is that states that have not established an e-sales tax position (are there any?) might now use the New Jersey and West Virginia cases as precedent to collect additional taxes on companies, which, of course, will pass them along to us consumers.

Not so fast: Now, however, Capitol Hill also is getting into the fray.

In direct response to the recent Supreme Court's refusal to hear the economic presence v. nexus cases, two Senators have introduced a bill that would codify the Quill decision.

S. 1726, known as the Business Activity Tax Simplification Act of 2007 (BATSA), would explicitly require businesses to have a physical presence in a state in order to be subject to income and "other business activity taxes."

Senators Mike Crapo (R-Idaho) and Charles E. Schumer (D-New York) are sponsors of the bill, which is pending in the Senate Finance Committee. Both have introduced similar legislation in previous Congressional sessions.

"Businesses should not be punished with double taxation simply because their products reach beyond state borders," said Schumer in a press release. "At a minimum, this is a huge administrative burden. In the worst case scenario, these differing state tax treatments will drive businesses to states with more favorable laws. Either way, the effect on commerce is debilitating."

Crapo also cited the existing federal law, Public Law 86-272, enacted almost 50 years ago to give Congress authority over matters of interstate business. BATSA is a much needed update, said Crapo, since business today is conducted much differently than it was when the law was enacted in 1959.

Without the legislation, he said, the WVa and NJ "economic presence" taxation basis could have "catastrophic consequences for any business that wants to reach out to customers in other states; at the very least, it creates a climate of uncertainty that inhibits business expansion and innovation."

The Tax Foundation calls the S. 1726 "a helpful step in the long campaign to stop state tax collectors from making unreasonable demands on out-of-state companies." Look for consumers to line up alongside the Tax Foundation and businesses in supporting BATSA and state governments to marshal forces against the legislation.