Clearing out some e-mail today I finally got around to reading my June alumni newsletter. Usually I give the e-mail missive a cursory glance and hit delete. My apologies to the Techsters putting it together; as the saying goes, it's not you, it's me.

But this time an article piqued my interest.

Now, I'm not a fan of reality shows, but I am a movie buff. So I've watched a couple of episodes of Fox's On the Lot. I've always dreamed of making a movie (or two or ...) and I was intrigued by the possibility that the next Orson Welles or Francis Ford Coppola or Howard Hawks might finally get their chance to fulfill their dreams.

Unfortunately, while some of the erstwhile movie makers have interesting cinematic visions, the show dragged a bit. Too much talking and faux drama and not enough films. Maybe they should include would-be editors in the competition.

But one of the one-minute features they actually, finally showed was pretty good. It's called "Lucky Penny," about a coin that doesn't live up to its name. Essentially, it's a live action cartoon, a short film that's long on physical comedy.

So imagine my surprise while reading Texas Tech Today that the maker of the mini-movie is a Tech grad! The news made me doubly glad that I liked the film, produced by Will Bigham of Canyon, a small town just south of Amarillo.

Bigham got his Bachelor's degree in Theater Arts from Tech in 1998. He and his wife Catherine, also a Tech alum, now live in Glendale, outside of L.A. They started their own film production company after living through years of having no control over their  acting destinies.

But now comes the proverbial potential big break. The show's winner will get earn a development deal at DreamWorks.

Click here for admission to both of Will's films, "Lucky Penny" and "Glass Eye," described on the show's Web site as a witty and twisted comedy about a man's adventure around his house, attempting to retrieve his glass eye." You also can read more about Will in the Tech publication.

And give the show a shot. If you like Will's films, cast a vote for him. All of us Techsters would appreciate the support!

Scene 2. Take 1. Tax tie-in: If Will wins and decides to come home to Texas to make his first blockbuster, he now will get some tax relief from the state.

Earlier this month, Gov. Rick Perry signed into law a measure that provides to help Texas attract jobs in television and film production.

Filmmakers who shoot in the Lone Star State are eligible for grants equal to of what they spend here. If you're interested in the money for your movie, this Texas Film Commission Web page has details on eligibility requirements.

Pay close attention, though, to the provisions on content and project types. Seems that folks in the governor's office, since that's where the Film Commission is housed, want final cut on all projects. The law expressly states that "Not every project will qualify for a grant. The State of Texas is not required to make grants to projects that include 'inappropriate content' or 'content that portrays Texas or Texans in a negative fashion.'"

And just to make sure that what was OK in the screenplay did made it into the film, "Once an approved project has completed, the Texas Film Commission will review the final script or game content before issuing the grant, to ensure that revisions made during production have not created an extreme difference from the content as initially approved."

Censorship silliness: While I'm pleased that Texas is trying to stem the loss of productions to neighboring states, this doesn't strike me as the best way to do that.

And I'm sure that I don't want some state office workers deciding what is or isn't a "good" Texas movie. Standards obviously would change depending upon who's in the governor's seat and film office. A movie that, say, Perry and crew liked might be deemed inappropriate by the next administration, or vice versa. 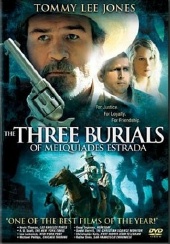 Take, for example, a recent Texas movie I really liked, "The Three Burials of Melquiades Estrada." It was made here by native son Tommy Lee Jones and was a Cannes Film Festival winner. But would it qualify for the new Texas film tax breaks? Maybe not.

It portrays a West Texas sheriff as a buffoon, the two female leads are adulteresses, one Border Patrol agent is a murderer and misogynist (at least that explains his wife's affair) and Tommy Lee's character knowingly hires undocumented Mexican workers.

Not a pretty picture of Texas in the traditional sense, but a damn good movie.

Christopher Swope over at Governing.com's blog agrees with me that the law is boneheaded. Movie makers and film fans have enough problems with the arbitrariness of the MPAA ratings. We don't need to add to movie making mayhem here in Texas with content curbs in tax laws.

My movie list: You can read more about Melquiades in this Texas Independence Day post, along with a list of some of my other favorite Texas-based movies.