When we got back to Texas in May 2005, the state was in the midst of a drought, which I bemoaned in January 2006 and again last September.

The came some spring rains, which everyone welcomed.

But it's true: You can have too much of a good thing.

These last two weeks have put an end to Central Texas' infatuation with precipitation.

Although local meteorologists say June is typically a wet month for the Austin area -- usually the third or fourth wettest month of the year -- the late-month rainfall we've gotten is unusual.

Sadly, this rare weather occurrence also has been deadly.  So far, the June storms have claimed 11 lives in North and Central Texas. A search is continuing for others who are listed as missing.

So when patches of blue sky peeked out today, you could almost hear a collective sigh of relief.

Skies opened up, then the floodgates: As the rain kept falling, floodgates at all the dams in Central Texas were opened this week to let some of the record rainfall collection down river. Yesterday, the hubby and I ventured to the nearby Mansfield Dam to see what exactly was going on.

We first drove across the bridge just below the dam and looked out at the section of the Colorado River known as Lake Austin. We were stunned. On the river/lake, there's a smaller bridge that carries traffic over the waterway. The water was even with the asphalt and had spilled onto previously dry banks.

When we turned onto the access road to get a closer look at the dam, we immediately understood why.

You can see the force of the water pouring from the four Mansfield floodgates that were opened. 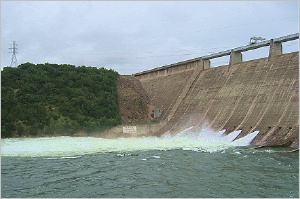 According to one of the TV weather guys, gallons per minute were coursing through each gate.

And don't be deceived by the "blue" sky. It appeared when I sharpened the image. The sky was totally overcast; in fact, it sprinkled on us the whole time we were at the dam.

See that sign in the middle of the above photo? Here's a closeup. 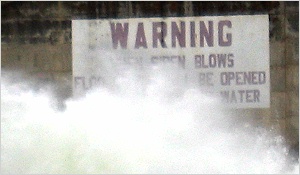 Sorry about the spray. It says, "When siren blows flood gates will be opened. Look out for swift water."

Finally, here's a closer look at the gates. It was pretty amazing. 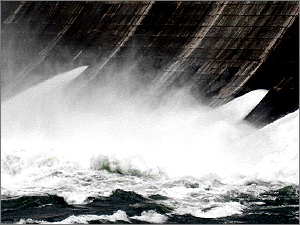 We were able to stand about 100 yards from the dam and the roar seemed to us to be our own mini Niagara Falls.

And it definitely made us thankful that we were getting to see some of the aftermath of the record rainfall under controlled circumstances.

Disaster relief: As I mentioned in this posting last spring, Mother Nature gets cranky now and then and we mere mortals have to deal with it the best we can.

Some help is available from the federal government. And when an area is deemed a major disaster, some of that assistance comes via tax filing. In these cases, you choose to claim disaster-related losses on the tax return for the year it occurred (in this case, on 2007 returns to be filed next year) or you can claim the loss on your prior year's returns by filing an amended 1040.

Do the calculations for both years to see which will give you the best result, i.e., the most money back or smallest tax bill.

Here's hoping you never have to call on Uncle Sam for help after a flood, tornado, hurricane, wild fire or other disaster, but just in case, you can check on disaster declarations at this FEMA page.

And for tax help, take a look at IRS Publication 547, "Casualties, Disasters and Thefts," and this story on filing disaster-related claims.