W's tax cuts pay off for himself and Dick

A new paper from Citizens for Tax Justice shows that the 2006 tax bill of W and wife Laura was $31,037 lower than last year's bill. That's 14 percent smaller than the couple's prior year taxes.

No, the First Family didn't hire a new accountant. Instead, the Bushes can thank the president's own tax cut program.

24.4 percent of W's 2006 income went to taxes, according to CTJ. Without his tax cuts, he and his wife would have paid 28.4 percent of their earnings to the IRS.

Here are the figures, per CTJ, for the First Family: 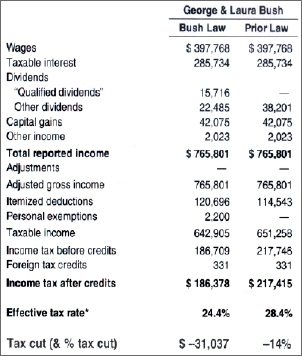 Dick and Lynne Cheney got an even better tax deal. 23.4 percent of their 2006 income went to taxes, down from the 29.5 percent they would have paid without the tax cuts.

You can see CTJ's complete calculations on the Bush and Cheney 2006 tax savings here.