Chris Cohan, owner of the Golden State Warriors, is turning his attention from the NBA court to the federal court system. That's where he's facing charges that he owes more than $160 million in back income taxes and penalties. 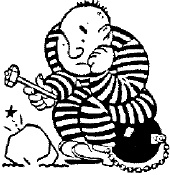 The IRS alleges that Cohan set up three tax shelters to avoid a hefty bill in 1998 after selling cable TV company Sonic Communications for more than $200 million. Uncle Sam is demanding about $95 million in past due taxes and another $66 million in penalties. This is the second attempt by the IRS to get what it says is due from the sale.

Another businessman, albeit on a much less grand scale, is facing the tax music at the state level. Jerry Tillman Green, proprietor of a gas station in Moody, Ala., pleaded guilty last week to one count of sales tax evasion, three counts of submitting fraudulent state and local sales tax returns and three counts of failure to file Alabama income tax returns. Green was ordered to pay the $23,702 state treasury shortfall and placed on two years probation.

And from the who can you trust file, we have a pair of tax preparers who have been barred from doing that job. Documents from a Chicago federal court indicate that Neal and Royanne Reddy, who have Royanne's Tax Services offices in Marseilles and Princeton, Ill., intentionally inflated or fabricated client business expenses to lower tax bills or increase refunds.

Those actions, according to the court, produced tax revenue losses totaling $13 million. The couple has been ordered to notify their customers of the legal ruling, provide a client list to the court and post the court’s findings at their businesses and on their Web site.

On the road again: We're cutting this week's report a bit short, as I've got packing to do. Yes, I'm traveling again for another Taxpayer Advocacy Panel meeting. This time, I'll be in Seattle through Wednesday, but I hope to have time in the evenings to post a few items.

I also hope to get back to the hotel room after today's meetings and dinner in time to catch the season finale of Heroes. I saw 'em save the cheerleader (like me, a native of Kermit), so I absolutely must find out how that enables them to save the world.