That's me, since I got up at 4:30 a.m. Central time Monday to head to the Pacific Northwest for three days of Taxpayer Advisory Panel (TAP) meetings.

As it turned out, I could have slept a bit later, since traffic to the Austin airport was no problem. But I didn't know that, so I got up at o-dark-thirty.

Once at the airport, however, travel to the actual plane was not so smooth.

First, at the self-check-in kiosk, I couldn't find my reservation. I was using the first confirmation sheet the TAP office sent me; apparently, they canceled it and rebooked. The office did send me a second notice of my travel details -- same flight number and time, different confirmation number -- but I thought it was just a copy of the first one.

Eventually I got my boarding pass. And I've thrown out the incorrect original itinerary so I won't have the same problem coming home.

Next, on through security. Or maybe not. I forgot to take off my shoes, resulting in multiple trips through the scanner before both the TSA guy and I realized the problem. At least I didn't have to be "wanded."

Then I headed to the far end of the airport looking for Gate 26E. As I was running out of portals, I pulled out my boarding pass and discovered that 26E was my seat; I needed to be all the way back at Gate 13! Luckily (pun intended), I backtracked with time to spare.

In my defense, I hadn't had any caffeine yet. And at least I got plenty of exercise to offset the four hours I was about to spend on a plane.

Happy landing: The trip from Sea-Tac to the hotel was much less eventful.

I've never been here before, but I can tell you right now I plan to come back when I have time to play. And yes, hubby dear, reading this from home, you can join me!

It's gorgeous. I got my first spectacular sight before we landed, as we flew right by snowy Mount Rainier.

Once on the ground, I was taken by how lush it is; all the fir trees and a gazillion blazing yellow shrubs. They look like forsythia, but I'll have to do some checking on Seattle area flora to be sure.

We drove past SafeCo Field and the adjacent football stadium. And I got a kick out of a concrete sculpture under a bridge. The shuttle driver said it was waves, but to me it looked more like a dozen or so fins of orca, which populate the waters here.

Speaking of water, I can see a section of it from my hotel room window. It's not the most scenic section of the bay area; quite a bit of construction going on, with equipment and cranes marring the vista. Is there nowhere without construction?! From the other side of the hotel, there's a good view of the Space Needle.

And while it was partly cloudy but dry when I landed this morning, just to make sure everyone knew we were in Seattle, Mother Nature had it raining on us by dinner.

Oh yeah, the TAP meeting: The reason for my visit, the TAP session, was a good one today [Monday]. One item we examined is the IRS' Taxpayer Assistance Blueprint released last month.

The document was put together by the IRS, using its own info as well as material and suggestions from the IRS Oversight Board and the National Taxpayer Advocate, in response to Congress' demand for a five-year taxpayer service plan.

You can read the IRS announcement of the blueprint's release here; a summary of the plan here; and the full report here.

This is where a quip about the document's value as a sleeping aid would usually be inserted. But given the hour my Monday started, I think I'll forgo that this time.

Picture perfect: The painting below is the one that got the hubby and me hooked on the works of Robert Bateman. We saw it in the window of the Snowgoose Gallery in northwest D.C. soon after we moved there as newlyweds. 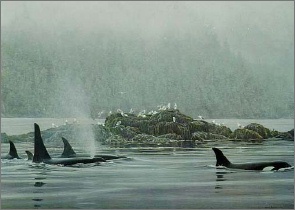 It was way beyond our budget back then, but it also was just too gorgeous not to buy. So we did. And we've never regretted it. The whales in this "Orca Procession" were spotted by Bateman just a bit north of Seattle, in the Pacific off of British Columbia.

Publication note: I wrote this post Monday night, May 21, around 10 p.m. Pacific time. However, because of connectivity issues here at the hotel (I'm thankful for free wi-fi; I just wish it was a bit more powerful), I wasn't able to post it as soon as I planned. That and the fact that I dozed off and just woke up and realized I hadn't put this up yet!

Now back to sleep for a few more hours before it's taxing and TAPping time again in Seattle.