The IRS Oversight Board, a panel created in 1998 by the IRS Reform and Restructuring Act, has given its OK to private tax debt collectors.

The nine-member independent Board met earlier this month to examine the controversial program's progress. Since last September, the IRS has been using debt collection firms to bring in certain unpaid taxes.

So far, the IRS has turned 33,824 cases over to the private collection agents (PCAs), accounting for unpaid taxes of $218 million. As of last month, according to the Oversight Board, the collection agents had brought in $19.47 million in gross revenue. $15.57 million of that went to the U.S. Treasury; $3.9 million was used to pay the PCAs, with the IRS also retaining a fraction of the collections.

Supporters of the PCA initiative note that the contractors cannot take enforcement actions, such as issuing liens or levies, or negotiating installation agreements. Using private collectors, they argue, helps the IRS focus its resources on more complex cases.

Opponents, including many in Congress, are concerned about privacy issues and potential abuse and harassment of taxpayers by the debt collectors. Various bills have been introduced to rescind the IRS's ability to contract with private bill collectors. The House measure to halt PCAs, H.R. 695, has 121 cosponsors; a similar bill in the Senate, S. 335, has 18 cosponsors.

Right now, though, PCA opponents on Capitol Hill will get no help from the Oversight Board.

The Oversight members cited IRS reports that only 25 taxpayers who have been contacted by the PCAs, or less than one percent, have filed complaints about the process. Only one of the 25 complaints was considered valid by the IRS.

"Overall, this program seems to be working well, although the Board intends to continue to monitor it closely," said Oversight Board Chairman Paul B. Jones. "Through this program, the IRS has found a way to reach a specific segment of the non-compliant taxpayer population.

"The Board hopes that the agency considers other ways to apply a similar pro-active approach to non-compliant taxpayers, such as those who do not deposit payroll taxes."

Paying to bring in the dough: In addition to looking into the PCA program, the Oversight Board also made its annual recommendations on the IRS's budget. A key component is how much money the agency will get to carry out its other tax enforcement activities.

W's proposed FY 2008 IRS budget would provide $246.4 million for enforcement programs. The Oversight panel recommends $351.4 million go to these efforts. According to the Board, the additional $105 million in funding would generate "over $400 million a year in tax revenue, and more if the indirect effect of enforcement is considered."

As this table from the Oversight Board's FY2008 IRS Budget Recommendation Special Report shows, the panel regularly recommends the tax agency get more money than either the president proposes or Congress allocates. 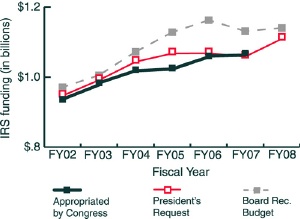 Both the Administration and the Board agree, however, on an increase of $20 million for taxpayer service initiatives. The money should help reverse a trend noted by the Board.

The panel found that the level of IRS customer service has declined slightly since FY 2004, with roughly 15 percent of callers hanging up out of frustration before talking to an IRS service rep.

While I don't like this idea, it cannot be any worse than the "attitude" of the ACS (Automated Collection Service) people. they ALL went to nasty school.