Houston, we have a holiday!

Hello from the city that's home to NASA's Johnson Space Center, the Astros, mind-numbing traffic and, for a couple of days, is host to the hubby and me as we -- well, more me -- celebrate the end of tax-filing season 2007.

A perfect storm of events coincided to get us to Houston, which, according to the guest book here in the hotel, is the fourth largest U.S. city. That certainly explains the traffic.

There are, of course, the aforementioned Astros (National League 2005 Champs; that's the pennant there to the left), as well as a great exhibit making its only U.S. stop at the city's Museum of Fine Arts and a Cirque du Soleil performance.

All this on and just after the 4/17 tax due date was a coincidence, fate even, we couldn't ignore.

So we bought tickets to the 'Stros, the exhibit of French painters and the funky Canadian circus and hit the highway this afternoon (actually yesterday afternoon, as I notice my PC clock says it's now after 1 a.m. Wednesday morning).

The only downside has been the dreary weather. We drove through a continuous drizzle and tonight it even showered a bit.

But even that couldn't undermine the excitement of the first vacation the hubby and I have taken since we moved back to Texas. Sure, I wandered around West Texas last September and it was great fun, but that was with my cousin, sans our spouses.

And although the skies yesterday were overcast, the landscape on the drive down was spectacular. All the area's rain has produced literally fields of blue, yellow, pink, purple, white and red wildflowers. It was amazing. I'm hoping that on the way home, the weather will be better. If it is, I'll get the hubby to pull over and I'll snap some photos.

We also spotted a couple of hawks, a deer grazing along the roadside and enjoyed the views of the multiple crossings of the winding Colorado River.

And the precipitation wasn't a problem once we arrived in town, dropped off our bags and headed to the Astros' park. True to their indoor Astrodome days, the team's new venue, Minute Maid Park, has a retractable roof. Or, as was the case tonight, a closeable roof.

The Astros played the Florida Marlins, and we enjoyed the irony of moving 1,300 miles from the Sunshine State and then driving another 200 and to see our 'Stros play the South Florida team!

It was a great evening. The Astros won 6-1, in large part to a towering home run by Carlos Lee into the seats, aka the Landry Boxes, pictured below. 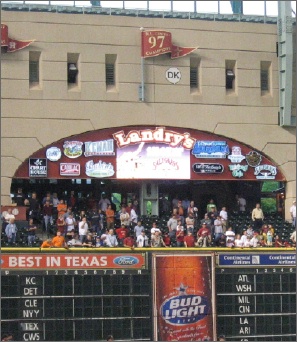 And longtime 'Stro Craig Biggio (number 7 there at the plate) got two hits, moving him past Hall of Famer Frank Robinson on the all-time hit list. 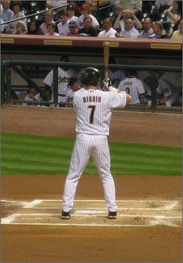 Tomorrow ... I mean later today ... it's the museum in the day, followed by Cirque that evening. I'll be back home Thursday to offer a post mortem on the 2007 filing season. Until then, I plan to enjoy myself.

And I highly recommend that everyone take some time off and celebrate however you see fit the successful filing of your 1040 (or extension!).