I cannot tell you just how much I wish I had come up with that headline. But I must confess. It's the creation of a copy editor at the New York Times.

Now that you've had a few minutes to conjure up all sorts of interesting, and perhaps disturbing, IRS dress code images, here's what it refers to: the new BBC America series Robin Hood. 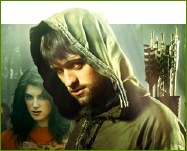 The Times' reviewer likes the show. That's good to know, but I was going to watch it regardless. I've always loved the tales of Sherwood Forest (and yes, it's a real place). And, as the review notes, it's predicated on taxation:

Robin Hood [is] a public servant who is a great deal more than the sum of his charitable instincts, returning home from fighting in the Crusades. He owned an estate, but it is no longer his; still he retains his sense of noblesse oblige. He hates the taxes levied on the poor and he hates the tax collectors who go after his inadequately sheltered and fed countrymen.

I don't think I can justify prorating out that hour of Time Warner's bill, but it still should be an enjoyable way to spend part of a weekend night, (it airs Saturdays at  9 p.m. Eastern/8 p.m. Central). If your cable or satellite system gets BBC America, tune in, too, and we can compare entertainment and tax notes next week.