So what if Will Farrell's IRS guy in Stranger Than Fiction was a bit of a box-office disappointment. Maybe since taxes are so personal, as entertainment fodder they're better suited to the small screen.

Andy Richter hopes so. His new show, Andy Barker P.I. is coming to your TV next week. 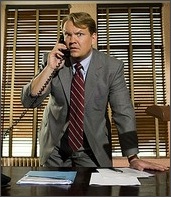 Barker's a CPA. He goes where the numbers take him. In this new NBC series, that's to a strip mall where he's trying to get his new accounting business off the ground.

Unfortunately, there aren't many beans to count. So when, shades of Sam Spade, a mysterious woman shows up at his Fair Oaks Plaza office thinking he's the suite's former private eye tenant, Andy is intrigued.

Have they? Maybe. But I'm not the best judge of such things. If I like a show, that generally dooms it. Meanwhile, those that I have absolutely no interest in are ginormous hits. Prime example: The hubby and I have never seen one episode of Survivor or American Idol.

I'll give Andy Richter/Barker a shot. The pilot was OK, and I got a kick out of the tax references. Richter has a dumpy charm and the supporting cast has potential.

You can judge for yourself next Thursday, March 15, when Andy Barker P.I. premieres. Or, if you've already finished your own 1040 and need the rush of more taxes, you can watch the show's six episodes now online. The previews are courtesy of, fittingly, TurboTax.