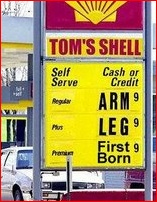 Gas prices have bumped back up, but the tax break for Toyota hybrid vehicles is heading down again in less than a week.

Toyota buyers who got one of these fuel-efficient autos by Sept. 30, 2006, got the best tax deals for that make. Last Oct. 1, Toyota's credit amounts were cut in half.

In a few days -- April 1, no joke -- the credit will be reduced again. And this Oct. 1, the Toyota tax break will disappear completely.

The reason, as everyone is well aware of by now, is that lawmakers decided to give a break to other automakers (can you say Detroit-based gas guzzler producers?) who were not as advanced in building and marketing fuel-efficient vehicles.

Under the law creating the credit, once a manufacturer sells 60,000 hybrids, the credits for all that company's eligible autos begins phasing out until it is gone. Toyota hit the sales mark last summer, primarily thanks to the popularity of the Prius and last year's high gas prices.

No other automaker has even begun the countdown yet, although Honda might start phaseouts later this year. It's possible, based on minuscule sales, the American hybrids might retain their full credit values until the law expires at the end of 2010.

Yes, that right. The law penalizes the automakers that do their jobs better than their competition. That means that taxpayers who want to buy what are regarded as the better products, hence the greater sales, also are penalized by getting a smaller tax break. Definitely a stupid decision by lawmakers, but given how laws tend to be created, not that surprising.

Anyway, if you bought a Toyota hybrid last year, make sure you note the exact day you drove it off the lot. It will determine how much of a tax credit you can claim on your return.

And if you're considering buying a Toyota hybrid, if you want the biggest possible credit to claim on your 2007 return, drop by your local dealership and drive one off the lot by Saturday.

Auto information: Here are some links to hybrid tax credit information that you might find useful, in both your car shopping and tax filing:

Just for fun: Mark Tapscott, author of the regular Behind the Wheel column, has posted his latest Carnival of Cars over at Edmunds.com's Straightline blog. Give it a test drive.