Three weeks. 21 days. That's how much time we have until our tax returns must at least be on their way to the IRS.

A recent H&R Block survey found that 80 percent of the people the company asked didn't know this year's due date is Tuesday, April 17.

The tax preparation giant referred to it as "surprising taxpayer confusion." Isn't that redundant? Thanks to Congressional tinkering, the tax code is continually changing (check out what happened last year alone here) so who's not confused?

Maybe that's why so many of us -- the IRS expects 47 million taxpayers to put off the deed until April rolls around -- haven't yet filed. Yes, I said "us." I haven't even started working on our 1040 yet.

Tax procrastinators tend to fall into at least one of two camps.

There are those who owe the IRS. This is totally understandable, since if you have a balance due, it makes no sense to file and pay early. True, you can always file the forms first, either electronically or by paper, but not send your check until April 17. But that means dealing with your taxes twice, and no one wants to do that.

Then there are those who, even though they might even be getting some money back, just haven't found time to fill out the forms yet. My tent is firmly pitched in this camp, although the hubby and I might owe, too. I won't know until I finally do get around to doing our taxes.

Regardless of the reason, I and all my yet-to-file friends have three weeks, 21 days (actually less now, since I didn't get this posted as quickly as I planned!) to get our act together. If you're in the same situation, here are some things to think about.

First, get out the tax documents that you stuffed in a drawer or a box or just threw in a corner of your bedroom. Make sure you have all the docs you need -- W-2s, 1099s, mortgage statement, bank and investment statements. 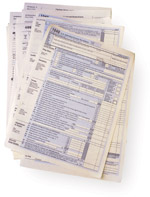 If your life is basically the same as last year, use your 2005 return as an outline. It will help you see what you reported and what filing materials you might be missing.

Next, gather all the tax forms you need. You can download them from the IRS Web site or, if you use tax software, it should have what you need.

What's that? You say this simple act of pulling all your tax crap together has energized you? You're ready to actually tackle the form? Cool. Here are some things to consider.

IRA contributions: Whether you have a traditional IRA or a Roth account, you can make your 2006 contribution as late as April 17. Just make sure you account manager gets it by then and credits it to the correct year. A day late and it goes toward 2007. That's not necessarily bad … unless you have a traditional IRA and you deducted it on your tax return. If your 2006 contribution didn't make it into the account in time, you'll have to amend your return.

If your child has a Coverdell Education Savings Account, April 17 is the deadline day to put 2006 money in it, too. No tax deduction for contributions here, but by putting money in the account each year, it grows a bit more.

Charitable donations/deductions: Are you planning on taking a deduction for your charitable gifts? Make sure you have records of the donations. Receipts weren't required for 2006 monetary gifts unless you donated $250 or more, but most places send receipts anyway. And you'll need them or some other type of IRS-acceptable documentation for 2007 gifts, so you might as well get in the habit now.

You don't have to send in the receipts with your return, now or next year, but if the IRS ever questions your deduction, you'll need them. Plus, they help you remember all that you gave so you don't shortchange yourself when you itemize.

If any of your donations were goods, make sure that clothing and household items you gave away after Aug. 17, 2006, were in good or better shape. If the IRS questions your gifts, it could disallow deductions it thinks were overvalued. A good idea here, and something to think about as you give this year, is to take a Polaroid or digital snapshot of the goods to support your valuation.

And remember than any mileage you incurred for volunteer work may be deductible as well, so if you didn't keep track, try to accurately recreate the driving you did, such as delivering dinners for Meals on Wheels.

Follow the form: As you fill out your return look at every line. Many or even most might not apply to you, but you'll make sure you didn't overlook anything. And take special note this year of the telephone tax refund and the tax breaks that were extended late last year.

The phone tax is clearly on the 1040EZ, 1040A and 1040, but some folks are having trouble claiming it. It was ignored on a third of the returns filed earlier this year.

Similar problems are likely for folks wanting to take the tuition and fees, educators' expenses and state sales tax write-offs. These deductions weren't OK'ed soon enough to make it onto the forms. The special instructions for claiming these, especially if you file by paper, can be found here.

Catch any mistakes: Once you finish, double check your math. That's one of the most common mistakes. Math verification is especially important if you file using paper returns. But don't overlook number checking if you use a computer tax program.

Sure, the addition and subtraction and percentage computations will be taken care of. But if you put in the wrong numbers to begin with, look out. Say your CD earned $1,500 in interest and you entered $5,100. That's going to make a big difference on your final tax bill.

The IRS just issued its list of common filing errors that it's seeing so far this year. So learn from those eager beaver filers who messed up earlier and don't repeat their mistakes.

Getting it on its way: E-file. It's quicker and if you have a refund coming (and yes, even some procrastinators are getting money back) it'll get to you sooner.

Your tax cash will arrive even sooner if you tell the IRS to direct deposit it into one (or two or three) of your bank accounts.

If you are sending in your return by mail at the last minute, be sure to use certified mail so you'll have proof of delivery. I've used plain old stamps those years when I didn't owe, but when I do have to send in a payment, I want to be sure Uncle Sam got it on time.

And don't forget your state taxes. Most of those departments are on the federal timetable when it comes to returns.