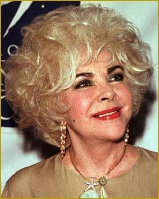 Elizabeth Taylor celebrated her 75th birthday yesterday with a bash in Las Vegas. Sorry I missed it, Liz. The card is in the mail.

I know, though, that she's not offended by my belated best wishes. Liz is much too gracious and giving, as evidenced by her gift to the New Orleans medical community to help its continuing post-Katrina rebuilding efforts, to worry about something as silly as a missed birthday.

Liz's generosity has an obvious tax tie. I could go on about donating now to your favorite charity and how that will get you a tax write-off next year; remember, the donation must be made in the tax year in which you claim it. And I could remind you to get a receipt this year for every philanthropic gift. That's one of the new charity-related tax laws.

However, when I read about Liz's Vegas soiree, what immediately popped to my mind was her multiple marriages. I know, it's just not right that a fine actress who's won two best actress Academy Awards (Butterfield 8 and Who's Afraid of Virginia Woolf?) is probably more famous for her eight trips down the aisle than her outstanding screen performances.

But, hey! She was partying in Vegas! Home of the quickie, what-me-worry?, who's that guy with Britney? Elvis as minister, wedding. So I got to thinking about Liz and her many marriages.

In case you forgot, in addition to bearing the title of Dame Commander of the British Empire, bestowed upon her in 2000 by that other Elizabeth, Queen II of England, Ms. Taylor also could be addressed as Mrs. Hilton Wilding Todd Fisher Burton Burton Warner Fortensky. Not to get too tabloidy, but here are the specifics:

Obviously, during all these couplings, Liz had the guidance of financial and business managers (if not that of relationship experts), so there was no problem with any U.S. tax returns she filed back then. But her adventures in matrimony made me think of the possibilities for tax trouble that we less rich and famous might face when a marriage is heading toward an unhappy end.

Breaking up 1040s: In those cases, couples might want to consider filing separate instead of joint returns. Sure, joint returns offer a lot of advantages, most notably lower tax rates, than does the MFS status, especially if you make a lot of money.

But if you are concerned that your spouse's tax dealings might provoke IRS inquiry and you definitely don't want any part of that, file separately. If you sign a joint return, even if you truly weren't aware of any dubious doings, you're still legally responsible for what's on that 1040.

Ken Herman, the tax writer for the Wall Street Journal, also notes in today's column that filing separately could help some couples avoid the alternative minimum tax. Since some deductible items, such as medical, casualty or unreimbursed business expenses, aren't allowed or have higher thresholds under the AMT, if these costs are attributable to only one partner, it might be advantageous to separate them on two returns.

Of course, always run the numbers both ways, as joint and separate filers, to make sure you file the way that does indeed save you tax money.

And if you find the separate 1040s do give you back a bit more cash, you might want to consider using part of it to buy your better half a little thank you gift!

On the rocks: If the marriage can't be saved, you might want to check out DivorceNet.com and DivorceSource.com. I also wrote this story for a local magazine. Sorry, guys, don't take it personally; the magazine is aimed at women. And this IRS Web page has a collection of official links on how to file for innocent spouse relief.

Maybe next time she should marry a divorce lawyer. That may save her some moola.