In the wake of the Taxpayer Advocate's 2006 annual report, analyses and number crunchings are flooding cyberspace.

In my earlier posting on the Advocate's recommendation that the alternative minimum tax be scrapped, I cited a 2005 study by the Center on Budget and Policy Priorities. That think tank has updated its AMT projections in a paper issued this week.

It's not a dramatic change, but more a confirmation of just how much money the AMT brings in. The new figures:

The latest CBPP paper also notes that even temporary legislative measures -- basically increasing the AMT exemption each year by enough to keep the number of affected taxpayers from skyrocketing -- are inordinately pricey. Continuing AMT patches for another decade would cost approximately $500 billion if existing income-tax cuts expire; it the tax cuts are extended, patch costs would be be about $900 billion.

Finally, the paper has the following interesting visual depiction of the distribution of the AMT as far as who pays it and how much they pay. 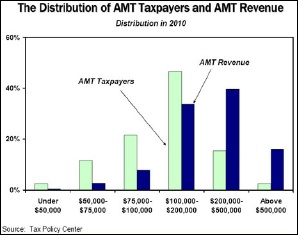 If you're like me and need reading glasses, you might want to click here where you'll find a larger version of this table, along with a couple of others.

Whichever size chart you view, the upshot is, according the Tax Policy Center calculations that were used for the table, that more than half of the benefits of AMT repeal through 2010 would go to the 4 percent of households with incomes over $200,000 rather than the middle class at whom the repeal/revision efforts ostensibly are aimed. Just goes to show one of the many factors that lawmakers are going to have to sort out in their AMT deliberations.

TaxProf also has a roundup of the latest writings about the AMT.

And that concludes our AMT coverage for a while. I promise ... hope!