That's not big, or even good, news for folks in many parts of the U.S. But here in Central Texas, it's a big and exciting deal, even by Lone Star State standards. 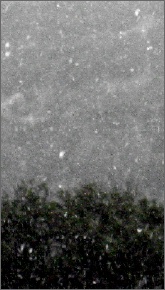 Austin's climate is pretty temperate. OK, we get triple digit temps in the summer, but honestly, it's a dry heat. Trust me. I spent 25 years in the summer saunas known as the Mid-Atlantic and Florida.

Hill Country winters, however, aren't that bad. At least they haven't been for the two we've been here.

In the Panhandle, it's a different story. Snow, often heavy, up that direction is not unusual. And Dallas seems to regularly get ice storms between December and March. 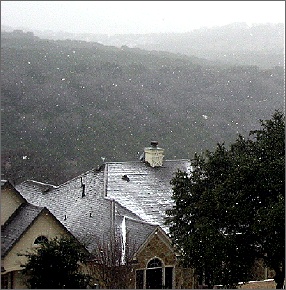 When it began falling here late morning, I called my aunt who lives a few miles west of us to make sure she knew it was snowing. She was not impressed, probably because she just got back from a tip to the Colorado Rockies.

But I'm loving it! This is what I moved from Florida for! 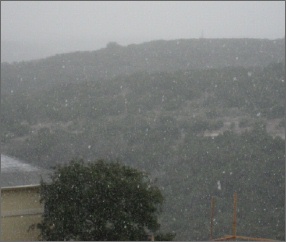 The pictures scattered in this entry don't do it justice, partly because I was taking them in shirtsleeves since I didn't want to dig out my coat. And partly because the shots are limited to what I can get from our porches or windows. The hubby knows what a klutz I am in ideal conditions, so he's forbidden any ventures into snowier areas of our hilly neighborhood. This is one time I'm letting him tell me what to do! 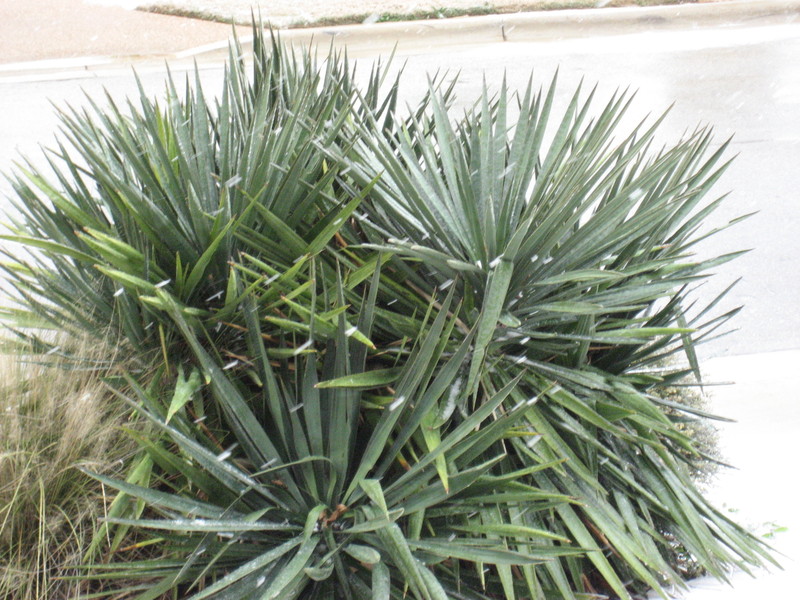 And that fuzzy photo? That's a shot of our Maryland backyard back in January 1996. Sorry it's not better, but -- wait for it -- I haven't unpacked all our photos yet and this old Polaroid was the first one I found. Yep, that's the mysterious hubby, up to his knees in snow while putting more food in our tray bird feeder.

We're reminiscing about those old big snow days as we sit here in Austin's light dusting of flakes.  It's nice, just hanging around inside, watching it come down.

We're staying toasty with hot chocolate and listening to the squeals of neighborhood children who are out having the time of their young lives, although I don't think they'll be able to build any snowmen. But it's enough snow to delight them.
I know just how they feel.

Financial flurries: Mother Nature's magic has her costs.With many business closed today, on the heels of Monday's MLK Day holiday, many owners are bemoaning this week's lost revenue. Some workers who don't get paid for days off are in worse shape. And the area cities and counties are spending up a chunk of their budgets on road clearing operations, which includes overtime pay for some workers.

Then you have to factor in the higher insurance rates that some drivers will face since they headed out on icy roads and paid the price. And, of course, everyone's heating bill will be just a bit bigger.

We woke up to snow too, here in Seattle! Enjoy!!