Just in case you were wondering, Antarctica is not a foreign country. At least not in the eyes of the IRS. And definitely not when it comes to Dave Arnett's tax return. 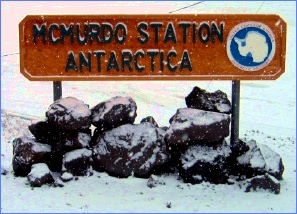 Arnett of Hayward, Wisc., a state that has its fair share of cold weather, was transferred in 2001 to McMurdo Station, Ross Island, Antarctica.

No, he did not royally piss off his boss. Rather, his employer was Raytheon Support Services, which had a contract with a National Science Foundation project at the South Pole site.

In filing his 2001 taxes, Arnett excluded the $48,894 he earned while at McMurdo as foreign income. The Tax Court disagreed, and an appellate ruling issued this week upholds that finding.

The Internal Revenue's Code definition of a foreign country is a geographic area "under the sovereignty of a foreign nation." However, the Antarctic Treaty signed in 1959 deems the frozen continent a sovereignless region, prohibits military activities and mineral mining and supports scientific research.

Currently, thousands of scientists from various countries are bundled up down there working on myriad research projects. It's a continent by committee, not a foreign country by U.S. tax standards.

So Arnett has to pay the IRS its portion of his 2001 income. And the penalties and interest that have accrued while he continued to argue his geopolitical tax point of view.

Maybe next time he should try to get transferred to a tropical island.

Austin cold update: As we listen to the latest round of sleet bounce off our windows, the hubby and I have taken to surfing Caribbean vacation sites. Some of those that are infamous as offshore tax havens also have more innocent appeal to folks just looking for a little warmth. We're two of those sun seekers.

It's still very cold and treacherous here. Our little bit of snow is under a thick coat of ice. In fact, we got word this morning from our garbage collector that crews wouldn't be picking up refuse today and possibly not the rest of the week.

That's not a problem. Our trash can is big enough to hold a few more bags. And even if the garbage truck driver had braved our hilly and iced over neighborhood roads, our trash bin wouldn't have been at the curb.

It's a challenge maneuvering it down our steep driveway to the curb on the best of days, so there was no way we were rolling it down there in these conditions. And, more importantly, we're not getting out of the heated house until we run out of food … or liquor!

Photo courtesy of B-518-M science project.
Thanks to TaxProf and Howard Bashman for the tip.

No kidding about that Antartica thing? I wonder why this has never come up before.

Surely, IRS will waive the penalties since this was clearly an innocent misunderstanding?

So says TaxMama, so it should be!