I'm not a big fan of what passes today for country music, especially the commercially glossy productions that regularly come out of Nashville. Part of my disconnect is musical, part is the process.

Sure, many Texas musicians have had success in Tennessee. But just as many have been overlooked or ill-served by the ruling country music machine. The distinctive and far-superior Texas sound that I love so is definitely down home, but not country according to many music label definitions.

And that difference poses a major problem for some fellow Lone Star Staters when they deal with corporate reps in Music City. If a song or a sound can't be comfortably plugged into a ready-to-sell package, the suits have no use for it.

Taking note of a talented Texan: On Sunday, though, I did look east to Nashville, as officials there inducted the inaugural group of music stars into the new Music City Walk of Fame.

Why do I care? Because I have an actual, personal connection to one of the inductees, Roy Orbison.

I grew up in Kermit, just a few miles from Wink, where Roy spent much of his youth. And one of my uncles (OK, uncle-in-law; OK, now ex uncle-in law, but he's my cousins' dad so it still counts) grew up in Wink with Roy and played in his first band, the Wink Westerners.

When my cousin and I revisited our West Texas roots this summer, we naturally stopped by Wink. It's a tiny town and in putting together our itinerary, I had joked that we'd probably just drive through unless the town had a Roy Orbison museum.

Hometown recognition of Roy: The joke turned out to be on me. As we drove down the main street, there it was. So we stopped, only to discover that entry was "by appointment only."

It turned out that the place wasn't that fancy, just that it was operated by a group of retirees who didn't want to spend all their days sitting around waiting for the occasional visitor. 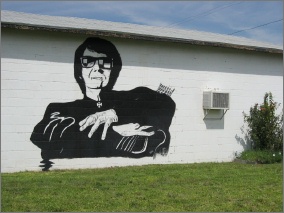 They did, however, post their names and phone numbers on the door. So my cousin, Kathy, started calling. Two no answers, but the third person picked up. After Kathy explained our uncle's (and therefore our) connection to Roy, she headed down to open up the place.

It's a small facility, just two rooms, but it has a decent collection of memorabilia considering that it's a part-time operation. There are lots of early recordings, one of Roy's high school yearbooks for which he created illustrations and the piece de resistance: a pair of his trademark horn rims.

The volunteer curator played us several of his songs, told us a few stories and put a stickpin in the world map mounted on one wall to record the distances visitors travel to see Roy's roots. It was pretty full already, with Roy fans from as far away as Russia. Austin was already represented, but Kansas got a new marker to acknowledge Kathy's visit.

We were most thrilled, though, to see a poster created from one of Roy's very early performance announcements. Smiling down from the wall behind the welcome desk was a large photo of the young Wink Westerners, including our bass-playing Uncle Charlie (known back then as Slob; kids and their nicknames), advertising their upcoming gig at a local dance.

Music vs. marriage: Unfortunately, our connection to music history is fleeting. Once my aunt and uncle married (as soon as she graduated high school), Slob gave up his spot in the band to get a "real" job so he could support his young bride.

But my aunt and uncle still stayed in touch with Roy and his family, even after their life choices took them to far different places. And my whole family felt a personal loss when Roy passed away in 1988.

If our uncle had not been so traditionally inclined, he could have been there when Roy's next band, the Teen Kings, had a minor hit in 1956 with "Ooby Dooby," one of the songs we got to hear at the museum.

Of course, most of the world identifies Roy with "Oh! Pretty Woman," its title shortened for the Roberts-Gere movie. I always liked that song, the growl especially, but Roy had many other hits that, once you hear them, will definitely make you go "Oh yeah! I remember that." 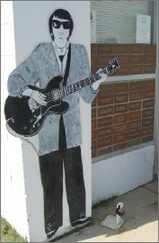 Roy's legacy: In selecting Roy, already a member of the Rock 'n Roll Hall of Fame, as an inaugural Walk member, Nashville officials cited him as, "A founding father of rock and roll, [who] became one of the most distinctive voices in popular music with his four-octave range and lyrically sophisticated, rhythmically advanced songs. One of the original Sun Records artists alongside Johnny Cash, Jerry Lee Lewis, Carl Perkins and Elvis Presley, he moved to Nashville in 1960 and signed with Monument Records. Over four decades he created the soundtrack for millions of lives ... ."

You can find more details on Roy, the Walk and the other inductees in this press release. This brief article previewed today's ceremony.

A happy tax tune for songwriters: Included in a batch of new tax laws enacted in May (discussed here and here) is a break that's music to the ears of composers.

Beginning next year, songwriters will pay capital gains taxes instead of higher ordinary tax rates when they sell rights to their collected works. That's a potential tax rate cut of 20 percent, from the capital gains rate of 15 percent to the highest regular tax bracket of 35 percent.

In addition to making a literal monetary difference to composers, the new law also provides songwriters with a moral victory they say is long overdue. They now will get the same tax breaks as their producers, with whom many collaborate on songs.

Under current-until-Jan. 1, 2007 tax law, a producer with a 50 percent interest in a song's royalties would pay a 15 percent tax on the sale of the song. The writer, however, would face the much higher ordinary tax rates (up to 35 percent) on his or her half of the sold song.

Now everyone involved in the music can sing the same cheery song all the way to the bank.