Do you know where your Congressman is?

Probably on your television screen. With less than a week to go before election day, every programming break contains a plea from some politician who wants desperately to represent us in Washington. 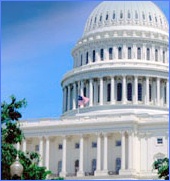 Oh, a few state and local candidates are getting screen time, too. But mostly, it's folks trying to convince us that they can do the job in D.C. Yeah, right. Especially when it's the incumbent begging for votes.

Not to jump on the "throw the bums out" bandwagon -- heck, there's probably not enough room for any more riders at this point -- but members of this 109th Congress have not provided many good reasons why they deserve to keep their jobs. And I'm just thinking about tax-related reasons.

Yes, I'm returning to my big legislative complaint this year: Washington's inability to get some widely-supported tax breaks back on the books. Specifically, the state sales tax itemized deduction and the tuition and fees and educators' expenses write-offs that filers who use the standard deduction can also claim.

According to IRS figures from 2004, the latest complete tabulations, 8.6 million filers claimed the state and local sales tax deduction that year. Another 3.7 million took advantage of the college tuition and fees deduction. And 2.66 million teachers were able to get a nominal tax break that year for classroom expenses they paid for themselves.

Lots of questions: It's not just me, although if the sales tax write-off isn't resurrected I'll definitely miss it here in Texas since we have no state income tax.

Numerous journalists have written about, and rightly and roundly criticized, lawmakers for playing political games at the expense of millions who were counting on the promised continuation of the breaks. As I mentioned, I've taken my own shots here, and as far back as last December in this post.

Even some Don't Mess With Taxes readers are getting concerned. Rick in Philly recently dropped me this note:

Do you know if the college tuition and fees deduction (up to $4,000 per year) will be effective for tax year 2006? I've actually called the IRS and it is apparent that they are not sure; some reps. told me yes, some said no it expired last year, some weren't sure. I'm trying to plan my return now and this is an important piece to the puzzle. I'd be grateful for any light you may be able to shed on the topic. Thanks.

Here's the frustrating answer I had to pass along to Rick:

This deduction did expire at the end of 2005. Congress supports renewing it, but the tax break has been held hostage to politics. Sen. Frist has insisted that this deduction, as well as the sales tax write off, tax deduction for teachers and the business research and development tax break, be tied to estate tax repeal. The latest plan is to renew these popular tax breaks when the Congress convenes for a lame-duck session after the November election. Most Capitol Hill and tax watchers expect this to happen and I agree with them. If I had to bet, I'd say this will be renewed before the year is out.

Rick also raises a very valid point. He, you and I have to pay our taxes according to a strict time table or face potentially costly consequences. So why can't Congress get its act together so that we can at least make accurate tax-paying plans?

A few official qualms: Lest I tar the whole Congress with a broad brush heavily coated with bright red "do-nothing" paint, let me note that at least a few lawmakers are complaining about the legislative logjam.

Mike Conaway, a Republican who represents a stretch of central-to-west Texas, told his colleagues during a recent Ways and Means subcommittee hearing that, "If we allow the sales tax deduction to expire at the end of this year, we will have to defend what is in effect a $1.5 to $3 billion dollar a year tax increase on selected citizens."

Yeah, have fun explaining how this one slipped through the cracks, especially since you guys and gals were able to extend a tax break for investors months ago ... even though the existing lower rates weren't due to expire for two more years. I have some e-mails from blog readers who will be adversely affected by the loss of the sales tax deduction that I can pass along to you.

IRS is a victim, too: Even the IRS itself is going to suffer because of Congressional inaction. In September, the Senate Finance Committee staff sent a memo to committee members noting:

The IRS contracts with numerous printers to ensure the delivery of the individual tax packages by the end of December so that taxpayers can file their returns in January. A large portion of returns (mostly returns claiming refunds) are received by the IRS in January. In order to ensure that tax form packages are timely mailed by December 27, 2006, the IRS must provide the contents of the tax form packages to the printing companies by November 7, 2006. The IRS needs a 2 to 3 week period to arrange and compose the tax packages. Therefore, as a practical matter, all forms and instructions contained therein should be finalized by October 15, 2006.

Oops! Looks like Congress blew right by that mid-October deadline. Uh, they were back in their districts, campaigning.

Another reader, One Big Mortar Board, sent along this MSN story on the cost of Congressional tax procrastination.

And remember, the delay doesn't affect just those who still use paper forms to file. The IRS can't put up online versions of the forms to download until Congress acts.

In fact, there's a whole series of "delayed" notations in this IRS publication schedule. And if time is money, we'll all be paying the costs.

Let's do the Time Warp again: Sadly, this is situation normal, all fouled up for Congress. Check out this story I wrote for Bankrate.com back in November 1999, especially the extra dollars that the IRS expected to pay because of lawmakers' ineptitude back then.

If you happen to run across your Congressman* in person before you head to the polling booth next week, be sure to ask him about these languishing tax measures. If you don't get the answer you want, remember that when you vote.

Want some practice voting? Then participate in our poll on Don't Mess With Taxes' home page (upper left corner). We want to know which expired tax deduction you want back. The poll will stay up through election day, Nov. 7, and you can vote once a day.

*or Congresswoman or Senator. No sexism or preference for a particular Capitol Hill legislative body is intended and none should be inferred by this reference or the post's headline. I was just going for succinctness. Hey, hubby! Quit laughing. I can self-edit ... sometimes.

On the bright side, they did renew the Saver's Credit, so it hasn't been a total loss. That seems to be about it though.
I really hate how they're not held to a solid timeline with this sort of thing. Last season, we couldn't e-file Hope Credit forms until late February because the IRS was somehow unable to accept them (something to do with KETRA, I think), so people either left or filed and then came back later to amend. I suppose it allowed the government a few weeks' extra use of their money.