Is it just me, or does this photo look like a collection of dishes filled with M&M candies? 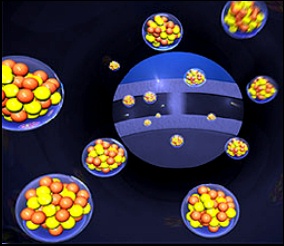 Artist’s conception of calcium ions traveling down the accelerator at a high velocity toward the rotating californium target. Photo courtesy of the Lawrence Livermore National Laboratory Public Affairs office. Click here for a brief video of the process.

That was my first thought when I flipped to the Science section of today's New York Times and saw the picture (and accompanying story; registration required).

What, I wondered, was the scientific hook for those melt-in-your-mouth goodies this time? Something to do with the impending Halloween trick or treating, no doubt.

Wrong. Those aren't M&Ms. They are an artistic representation of calcium, with 20 protons, being accelerated into californium, with 98 protons, to produce the heaviest element ever seen in a laboratory. Dubbed Element 118 (20 protons plus 98 protons; even I can do that math!), its discovery was announced by Russian and American scientists who created it.

Given Element 118's weightiness in scientific circles, I suppose my initial misidentification of it as a chocolaty tidbit wasn't too off the mark. I know M&Ms have certainly contributed to the mass (or massive, as the case may be) concerns of many of us!

Happier Hubble fans: The Hubble Space Telescope’s highest-resolution camera, which encountered a glitch three weeks ago, is back in operation. That's great news for all of us who love the Hubble's images, such as this spectacular "light echo." You can find more in this photo gallery.

The Space Telescope Science Institute, which operates the scope, says an open circuit was the problem, probably caused by a bit of space dust that got lodged in a relay.

The STSI essentially flipped the relay on and off via software commands and that cleared out the dirt. Now if I could just make the dust disappear from my furniture by toggling a light switch a couple of times!

UFO sighted in Washington, D.C.! In this case, the acronym stands for Unintelligible Federal Obfuscation.

At least, that's the way fellow tax blogger taxalicious sees it. He certainly isn't star-struck by the Ways and Means latest tax-writing effort. In fact, given the language of the Tax Technical Corrections Act of 2006, taxalicious suspects that it was written by members of Congress who were abducted by aliens, who then fed the lawmakers the bill's convoluted and indecipherable text.

If only it were that simple.

Rather, technical corrections are just part of our legislative process. Such bills are regularly introduced to iron out problems created inadvertently when folks started dealing with previously enacted tax (and other) measures.

Sometimes the ill effects that have to be corrected are not even that unforeseen. When I was in D.C., there were times when a lawmaker or staff member would find a potential problem, but rather than hold up a bill, especially if the issue was just a small part of a larger measure and time was tight, they would note that it would be taken care of in technical corrections.

Want to help shape this latest batch of tax-law corrections? The Ways and Means Committee wants your help. Really. It says so in this release.

So give the bill a look see and tell them what you think … if you can understand it.