Are you missing some money?

If you live in Texas, that's a definite possibility.

A special section of our Sunday newspaper announced that the Lone Star State is holding onto more than $1.5 billion in unclaimed property.

Apparently, this is just one drop in a very big bucket.

According to the National Association of Unclaimed Property Administrators -- yep, there's enough unclaimed cash etc. floating around out there to justify a national group dedicated to tracking it and getting it into the hands of its rightful owners -- there's more than $24 billion in abandoned assets nationwide, just waiting for someone to come and get it.

But only a small portion of owners actually do so. The NAUPA says that last year, 1.3 million people filed claims to recover $1.2 billion, which represents just 5 percent of country's overall unclaimed amount.

The great unclaimed cash stash: So where does this money come from? Well, if you moved and forgot to get back your electric company or other utility deposit, it's in your state's unclaimed collection box.

Every state has an unclaimed property law that calls for customer-abandoned assets, generally after there's been no account activity for a year, to be turned over to state officials, who then "make a diligent effort to find you or your heirs" and return the property at no cost or for only a nominal handling fee.

All in the family: I first heard of such "free money" when I worked for Bankrate.com. That personal finance Web site regularly ran a story about abandoned assets. But it wasn't until the hubby and I returned home to Texas last year that we saw any official notice about unclaimed property.

When the 2005 listing appeared, we were intrigued. Just like when we get the new phone book edition, we immediately flipped through the unclaimed assets list to see if we were in there. Because we both tend to be scrupulous (yeah, that's the word) about money, we weren't surprised that neither of our names showed up in the listings, which are broken out by city.

Then a name caught the hubby's eye. There, in the listing under his hometown, was his sister's name. She was (and still is) in Colorado, so he gave her a call and told her she should look into it. She took her brother's advice -- for the very first time, says the hubby -- and is she ever glad. It made her $700 richer.

Apparently, she had some stock, inherited many years ago, in a company that subsequently was bought by another one. As part of that deal, the purchasing firm bought back all of the original company's outstanding shares.

But during that transaction time, hubby's sis was working on a cruise ship, meaning she was literally at sea most of the time and only sporadically collected her "home" mail. The stock info apparently slipped through the cracks those many years ago. Thanks to the eagle eye of her loving bro, though, she finally got her buy-back bucks.

And the hubby, being a very good big brother, didn't even demand a finder's fee!

Doing your own tracking: I suspect the newspaper section in our Austin paper was or will be reproduced in cities across the state. If you don't get your local paper, you can find the same info online at the Texas Comptroller's special Web page. If you're in one of the other 49, check this page for links to state Web sites that have info on their unclaimed assets.

The Texas site's greatest feature, at least to my older eyes, is its search capability. I used it so I wouldn't have to squint my way through the 43½ newspaper pages of tiny type.

I found a Bell who shares my first name (yes, I go by my middle name; no, I'm not divulging my first name) and who lives or lived in Lubbock, my last Texas locale before venturing to the Washington, D.C., area many years ago. This woman has some unclaimed gift certificates from Land's End. I have shopped from that retailer's catalog, but these certificates are from 2001, after I left, so they're not mine.

I found another Bell to whom I wish I was related: Joshua. He has a couple of old accounts which owe him $200.01. Of course, it's probably not the Joshua I'm thinking of, since I'm pretty sure that he never lived in Texas. And even if it were the same Joshua, two C-notes are chicken feed for a guy who makes his living playing a $4 million violin.

But this year, there are no listings of unclaimed property for me, the hubby or any of our relatives. 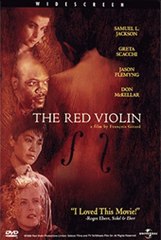 Musical notes: Joshua Bell attained recognition beyond the usual classical music circles thanks in part to his performance of the songs written for the movie "The Red Violin," the tale of a "perfect" violin that is stolen multiple times in its centuries-old life.

From the art-meets-life file, the instrument that Bell plays shares a couple of traits with the film's eponymous fictional fiddle.

Both Bell's Stradivarius and the cinematic red one are quite old and quite expensive. And like the film's instrument, Bell's violin has been stolen a few times.

You can get more details on the violinist and his strings in this NPR story, as well as this article from the Sydney Morning Herald. Click here for a video of Bell's performance Sept. 30 on the CBS' Saturday Early Show.

John Corigliano, who scored the film and won an Academy Award for his work, eventually expanded upon the movie's title theme with the Red Violin Concerto. The 38-minute composition debuted in 2003 in Baltimore. This summer, the Baltimore Symphony Orchestra and Bell reprised that performance for a CD.

If you don't want to wait for that recording to arrive in stores, the original chaconne is on "The Red Violin" soundtrack CD.

I went to the New Jersey unclaimed property website earlier this year and was able to get close to $5,000.00 for my father - half of which was due to the estate of my uncle who passed 15 years ago (my father was the executor and beneficiary). The application process was relatively simple. The only slight difficulty arose in getting a death certificate and Surrogate's Court statement for my uncle. I was disappointed that there was no money in my name.