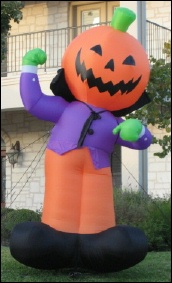 This giant Jack o' Lantern guards the yard of one of our neighbors. Yes, it's that big. The railing and door behind its big old pumpkin head is on the home's second story.

Thankfully, the house is a few blocks over, not next door.

I'm not sure if the inflatable creature is going to delight or scare trick-or-treaters. I suppose it depends on the kids' ages. Of course, there are quite a few similar, though smaller, decorations throughout our neighborhood (pictured in this post), so maybe the kids are already used to seeing them.

This is our second Halloween back in Texas and the hubby and I are enjoying it. Our community in South Florida was inhabited primarily by senior citizens -- yes, the stereotypes are there for a reason -- so we spent six years without the sweet tooth demands of little goblins and ghouls.

Here in our Austin suburb, however, there are lots (and lots and lots) of children and Halloween is a big deal. Quite a few houses are adorned with ghosts and witches and spider webs. We've got the latter, too, but they're actually courtesy of real arachnids that have discovered some corners that we tend to overlook in our less-than-regular dusting duties. 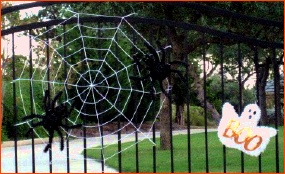 Last year we got a decent number of kids collecting candy even though it was a bit cool and rainy. Today's supposed to be unseasonably warm, so we're expecting a larger turnout.

Our favorites are the really young kids. who have to be prodded by parents to say the requisite phrase. They have no idea what's going on, but they know they get sweets. Most of the time they just stand there in costume, mute, with sacks or plastic pumpkins in outstretched hands.

Chocolate rules! Judging from a recent survey of what kind of treats the potential tricksters want, our mini packages of M&Ms and Butterfinger bites will be a big hit. The National Confectioners Association says that kids' favorite Halloween stops are the houses that hand out "anything made with chocolate."

I suspect that preference is probably shared by their parents, although data gathered by the U.S. Census Bureau indicates that as long as it's sweet, we'll happily eat it. In 2005, we each devoured, on average, around 26 pounds of candy. I know I did my part. The data collectors note that "it is believed a large portion is consumed around Halloween." You think?

Counting candy's costs: All of us are well aware of the costs of the candy. The most evident price we pay is measured by inches on our waistlines or hips. But there's also a direct pocketbook cost for some candy consumers: a tax on groceries.

Here are the scary tax facts as compiled by the Federation of Tax Administrators and up to date as of Jan. 1. In 11 states, edible items that go into paper or plastic grocery bags are taxed at the state's regular sales tax level. This happens in Alabama, Arkansas, Hawaii, Idaho, Kansas, Mississippi, Oklahoma, South Carolina, South Dakota, Utah and Wyoming.

Six of those states (Hawaii, Idaho, Kansas, Oklahoma, South Dakota and Wyoming) do at least offer lower-income shoppers a tax credit to compensate for the charges.

Food is exempt from taxation in the remaining 31 states and District of Columbia. Remember, though, that five of those states -- Alaska, Delaware, Montana, New Hampshire and Oregon -- don't collect sales taxes on anything.

Taxing "bad" food: There also is the issue of what a state defines as food. Water is essential to survival, but in most areas, it's not a food item so it's taxed while other items on the grocery shelves aren't.

Some states also regularly look to separate "good" food from "bad" and add additional charges to what are deemed unsavory edibles in order to force us consumers to adopt healthier eating habits. These assessments are referred to as snack taxes and food companies and their distributors fight them, sweet tooth and nail.

In the spirit of full disclosure, I watched this battle up close for the several years I worked in the Washington, D.C., government relations office of Nestlé, the world's largest food company. Yes, food company.

The Swiss giant makes more than Crunch, Butterfinger and Baby Ruth bars. It produces, among other things, Stouffer's frozen entrees; that aforementioned water, bottled most famously as Perrier; and even food for Fluffy and Fido via the Friskies and Purina brands. You can find a full product listing here.

Personal apology: Sorry for the implicit ad, but my 401(k) is still at Nestlé, which also will be sending me a small, but monthly, old-fashioned pension payment when I retire, so I want the company to continue to do well, although I didn't help my cause this year by buying Halloween candy from competitor Mars Inc.

You can read the latest argument against snack taxes in this Grocery Manufacturers Association release. The National Confectioners Association also is coming at the issue from the other side, acknowledging America's obesity problem and offering tips on ways to burn off candy calories.

Put down the fork: Even if I hadn't collected many paychecks from Nestlé, I'd still oppose the snack tax approach.

First, I don't think any food item should be taxed. We've all got to eat, so when a state makes money off this basic need, I find it distasteful. Plus, consumption taxes are inherently regressive.

In a regressive tax, of which a sales tax is the classic example, the less you earn, the higher your tax rate, since regressive taxes collect from all individuals the same dollar amount regardless of income level. So that means lower-income consumers end up bearing a larger share of the sales tax burden.

Secondly, while there's a long legislative history at local, state and federal levels to try to shape public policy via taxation, I'm bothered by the basic assumption that unless forced, we citizens cannot take proper care of ourselves.

When it comes to eating, we all know that every food item contains calories. Sure, sodas are full of sugar, but some all-fruit juices contain just as many calories from "natural" sugars. Basically, if you eat too much of anything, you'll gain weight. Avoid exercise and the pounds really pile up. 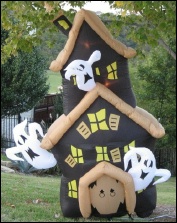 Yes, there also are some dental issues to consider. And some products contain what health experts say, for now, say are dangerous transfats. Don't get me started on the recent moves by New York City and Chicago to mandate restaurant recipes.

But scientists now know that chocolate also has some beneficial properties. Who's to say what is "good" food now won't one day be declared "bad," or vice versa.

The bottom line: Use common sense. Stay informed. Don't overeat. Exercise. Take some personal dietary responsibility. If you're a parent, that means keeping a keen eye on what your kids eat at home, in restaurants (eat-in and take-out alike) and in school.

You can treat yourself (and the kiddies) occasionally, just not after or between every meal. So enjoy tonight's trick-or-treating.

Just don't eat all the goodies in one sitting.

This was an interesting article. India is all set to streamline tax on food. I am hoping that the tax on junk food like potato chips goes down. 8-)

My favourite Halloween goodie would be - you guessed it right - potato chips!!

My entire life I've only lived in Missouri, Georgia, and Virginia (and during my married life, only the latter two), which apparently are three of the bottom four states for sales and excise tax rates. In Virginia, energy beverages do not count as a food product and are subject to the same tax rate as Windex, toilet paper, and other inedibles. Interesting.