That's the price tag of the newest, funkiest cell phone: the Serene. 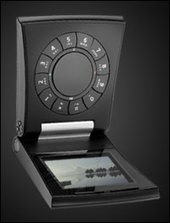 A creation of Bang & Olufsen, retailer of haute personal electronics, and Samsung, the Serene provides (or so says the company's press release) "an alternative for those customers who demand the highest quality, for whom simplicity and quality are important factors and for whom less can be more."

Apparently, that last phrase means less money for you, more profits for the phone maker, since the Serene goes for $1,275.

Forgive me for focusing on the price, but geez! More than a grand for a phone? A phone? Alexander Graham Bell must be spinning right now.

For that much, it better come preprogrammed with George Clooney's private number.

Sure, I've made my share of outrageous expenditures. Hey, I really, really like Coach handbags, my one extreme "girly" affectation. They are very well made, meaning they last substantially longer than cheaper run-of-the-mill department store purses. And they're pretty, an important factor since everyone sees what you've slung over your shoulder. The hubby has learned to deal with this, so please don't you judge.

But a luxury-priced phone? For an item that is tucked away, out of sight, in my very stylish purse? The only time other people see your cell phone is when you're using it in public. And then, no matter how fancy or attractive it is, they just see it (and you) as one big nuisance.

To me, phones, whether hardwired (yep, I still have a couple of those) or mobile, are just utilities. As long as the device lets me periodically call my mother (I know, Mum, not frequently enough; I'll try to do better), order a pizza or check on the whereabouts of the hubby, it's doing its job just fine.

Fancy phone features: I've had a cell account for eight years (yeah, less than a decade; told you phones weren't high on my priority list) and I've had just two phones.

The Nokia I got when we opened our original account in Florida lasted until we moved to Texas. I considered keeping it, but it was so outdated I had to get a more modern one to work with the new cell account features.

I picked one with a camera this time, although I can't really explain why. A momentary lapse of financial judgment, I guess. I've only used it to take indistinct shots of various bands we've seen in concert. And I haven't sent those pix along to anyone else. They're just sitting there, taking up memory space.

Well, I did take a shot of a neighbor's shrubs that I liked to show the hubby as he plans our landscape redesign. Realistically, though, it's a bell or whistle that I don't need or use.

Admittedly, I am in the minority when it comes to tricked-out cell phones. Others obviously want fancier phones and I'm sure the Serene will find plenty of buyers in the U.S.

It's already been on the worldwide market for about a year, coming out last October for callers in Europe, Russia and Ukraine willing to pay around 1,100 euros. That's currently about $1,395 in U.S. dollars, so at least the price has come down a bit.

Luxury phone 411: David Pogue, tech guru at the New York Times, has seen a Serene and says it has some nice features beyond just a sleek look. It has incredible call clarity, a top-notch camera, a Bluetooth transmitter and a currency converter, if you have any money left over after buying it.

The Serene's piece de resistance, at least for gadget guys: a motorized clamshell. Oh, yeah, I'll pay an extra grand to have my phone automatically open or close with just a slight touch of my finger.

But the Serene also is without some options that traditional cell phone users might miss, such as not being able to see the caller's name/number without opening (i.e., answering) the phone. Without that capability, all my calls would be going straight to voice mail!

You can read Pogue's review here (registration required). The official company word on the Serene is at the phone's Web page or you can arrange for a demonstration at the Bang & Olufsen nearest you. Me, I've gotta drive to Dallas or Houston to see one in person, since the high-dollar electronics retailer doesn't have an Austin store.

I could take the refund that we'll get next filing season for prior year taxes on our long-distance service and use it toward a Serene. The $40 the hubby and I'll get from the IRS won't make much of dent in the phone's price, but it should help pay for some of the gas to get us to a B&O store.

Network, smetwork: At least I've already got an account with Cingular, one of the only two cell phone providers with which it works. The other is T-Mobile (does Catherine Zeta-Jones have one, even though she's no longer the company's official spokesperson?).

Just like with the phone itself, I'm not a big shopper when it comes to cell service providers. One positive feature is usually offset by another disadvantage and in the end, at least for our purposes, they all come out about equal.

So when we got our Cingular account (it was AT&T then and is now part of that company again), we chose it because the network had a store in the mall closest to our house in Florida. I signed up for the next-to-cheapest plan, which gave me minimal free calls as long as they were made in the Sunshine State, and I didn't have any overage charges until we moved to Texas.

It's great for us, since neither the hubby nor I spend a lot of time on the phone. Right now, even after using it more than usual when I toured West Texas with my cousin this summer, we have more than 6,000 minutes available. And our combined bill with the rollover plan, which also lets me call from anywhere in the country without extra charge, is $50 less a month than our old plan.

Now if I could just trade some of those stockpiled minutes for some serenity, if not necessarily a Serene.