This week's Festival of Frugality (noted in this earlier post) also includes my item on whether to rent or buy a house. That topic gets a new spin, thanks to Census Bureau stats released this week showing homeowners in every state but one spent more of their incomes on housing costs last year than they did at the start of the decade. 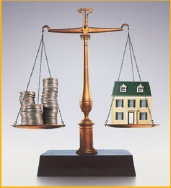 The raw numbers: In 2005, homeowners spent nearly 21 percent of their incomes on housing; in 1999, the amount was just under 19 percent of income. "Housing costs" include mortgage payments, taxes, insurance and utilities. Analysts says housing affordability has been hurt by a combination of escalating home prices, rising interest rates and lower incomes.

And it's not just homeowners who are hurting. According to this story in the New York Times, renters are feeling the price bite, too. The paper reports that the Southern California communities of Temecula and Hemet had the highest percentages of renters, 74 percent and 73 percent respectively, who spent at least 30 percent of their income on housing. (An AP version of the story, which doesn't require registration, is available here.)

Moving eastward, it gets even more costly. Forty-seven percent of renters in Boulder, Colo., reported spending at least 50 percent of their income on their living quarters. Just up the road from me in College Station, Tex., the number is just fractionally smaller; 46 percent of Aggieland residents spend half of their money on rent.

It's starting to look like the American Dream is a horrible nightmare for many.

House poor or just poor, period? So what's the answer, if you can't afford to rent or buy? Will we all one day be living in boxes under the nearest bridge?

Sadly, that's not such a farfectched question, especially for those who, in order to stretch their house-buying budget, took an adjustable rate mortgage. Check out these articles in the St. Petersburg, Fla., Times and the Winston, N.C., Journal on the high foreclosure rates of homes financed via risky ARMs. In both cities, the newspaper pieces underscore why federal regulators want lenders to quit handing these mortgages out like candy, as noted in the "ARMs, etc., also under the microscope" section of this post.

Will workers ever see their pay catch up to living, not just housing, expenses? The hubby says pay will never catch up. I suspect, sadly, that he's right.

Or will sanity return to the housing market? Everyone -- renters and buyers, landlords and lenders, buyers and sellers -- needs a dose of "Get Real" real quick!

What the heck is going on here?

I wish I had the answers. If I did, I'd obviously be in charge of the country, if not the entire world. Plus, I have plenty of other plans I'd like to implement once I get in power.

Until then, we need to be asking these questions (among others) of the folks who are ostensibly in control. I know government isn't the solution to every problem we face, but bad government -- or, worse, oblivious lawmakers -- are contributors to many of our economic ills.

Meanwhile, I guess we all can move to Alaska. That's the one place where housing costs stayed the same for the last few years. Start packing the parkas.