It's been almost a week since my cousin and I rolled back into Austin. Today, I finally pulled together the vital statistics of our trip down memory lane.

Now to translate those figures into dollars.

Kathy and I split the costs, but not on a formal basis. Essentially, whoever

chose the hotel paid for it. As for meals, if they weren't charged back to the room, whoever got to her credit card or cash first paid. We agreed that we'd total our shared expenses when we got home and then compare and reconcile, if necessary, any differences.

So below is my tally, which includes shared expenses, as well as what I paid for items for my personal use alone.

Hotels: Not surprisingly, this was the biggest expense, since three of our five nights were spent in historic or specialty accommodations -- Indian Lodge at Davis Mountains State Park; El Paisano, aka the movie "Giant" hotel, in Marfa; and Holland Hotel and microbrewery in Alpine. I got the Marfa and Alpine inns, as well as the chain motel room in Pecos.

Meals: Rather than fall into the stereotypical, and annoying, category of "girls splitting restaurant bills," we had just one tab for each eating experience. A couple of breakfasts were "free" in that they were compliments of the hotel (Best Western in Pecos, Holland House in Alpine). A couple of times those initial meals were late morning, so they substituted for lunch. And dinners ranged from Sonic burgers to 10 times more expensive bon appetit cuisine.

Gasoline: The tune-up of my Cavalier must have worked, because I only have three gas receipts. I think Kathy paid for two more pump stops. Five gas stops for almost 1,500 miles. Not too shabby, especially when you consider that I probably didn't get the best mileage because I took advantage of the roadways in West Texas that allowed me to go 80 mph. Yes, dear hubby, the little Chevy goes that fast, and yes, Mum, I was careful!

Miscellaneous: OK, I know that meticulous budgeters say to keep exact track of every expense. Not going to happen, my friend, on my vacation. I saved every receipt I got, but in a couple places there were no receipts and I just didn't bother to jot down the costs. I can tell you, though, that they were negligible, i.e., less than $5 apiece.

Sure, the give-up-your-latte school of savers say that every penny counts, but when I'm on vacation, I've already accepted that I'm spending money I normally wouldn't. Before I leave town, I know basically what the trip will cost and have set aside money to pay the credit cards in full when they arrive in a few weeks. If I can't afford a few extra dollars here and there along the way, I shouldn't be taking the vacation in the first place. 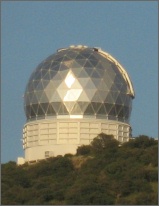 On our West Texas tour, these costs included the traditional trip mementos, such as T-shirts, mugs and books; admission fees to places like the Fort Davis national historic site, Law West of the Pecos Museum (page 4 of this brochure) and McDonald Observatory, whose massive Hobby-Eberly astronomical telescope is pictured here; along with the occasional refreshment or local souvenir.

Yeah, that amount is more than I thought I was spending, so maybe I should have paid more attention during the trip. But in my defense, some of these items are going to be Christmas presents, so that's less that I'll have to spend in a couple of months.

Plus, one of those aforementioned refreshments was the Blue Bonnet Café pecan pie, well worth its $11 price. Good, fresh, crisp pecans atop a luscious Karo syrup and egg filling that wasn't overly sweet. The hubby and I already are planning a trip to Marble Falls to restock our pie larder.

So what's the final damage? Drum roll please: My grand total comes to $728 even, or around $121 a day. And it might be adjusted down a little bit after Kathy runs her numbers. Regardless, not bad for everything, including spending a week with my cuz.

The psychological cost of travel: You've all been on vacation. So you know that even when you take a must-needed and long-planned-for getaway, travel takes a toll.

The excitement of new places is often countered by the frustrations -- sometimes small, sometimes great -- of being away from your familiar surroundings.

And when you travel with your family, there's a whole other set of issues to contend with.

There's the amount of time itself. You're suddenly spending almost 24 hours a day together, away from the safety of home-honed habits.

Plus, you're now paying real money to spend all that time together. That just adds to the pressure to have a good time. Unfortunately, that expectation sometimes falls spectacularly short.

Well, I am very happy to report that Kathy and I had a very good time. At least I did. If she didn't, she needs to move to Hollywood immediately! During the whole trip, we didn't have one fight about what to do, when to do it, how to do it and how to pay for it.

I don't know if we're just incredibly compatible, patient, accommodating or lucky. Whatever the reason, we had a fun time together.

These kids today: But that doesn't mean we didn't pay a psychological price in our attempt to recapture our lost youth. The bill was presented to us early in our journey, in what used to be Kermit's Rexall pharmacy.

All those years ago in my small hometown, the drugstore was more than just a place to get your prescriptions filled. We bought our cosmetics there, as well as school supplies, greeting cards, even toys. Topping it off, the place had a soda fountain.

When I was in junior high, the school was just a few blocks from the drugstore. Since we were such grownup 6th, 7th and 8th graders, we were allowed to leave campus for lunch, so we sauntered down the street, settled into one of the drugstore's half dozen booths and enjoyed our tuna sandwiches and soda fountain Cherry Cokes.

Although Kathy wasn't part of my junior high lunch group, she fondly remembered those fountain Cokes with a splash of cherry, too. So we headed to the drugstore.

Now, however, it's Movies and More. Most of the space is dedicated to DVDs, but some school supplies are still there, some items looking like they were left over from my school days. They included ancient ledger books and ribbons for Corona Selectric electric typewriters.

Electric typewriters? Does anyone still use them? If so, they must have to go to Kermit to keep them running!

But at least the soda fountain and booths were still there. In fact, the place was doing a decent lunch business (hot dogs cooked in a crock pot was the day's special). We climbed up onto a couple of bar stools and ordered fountain Cherry Cokes.

"We don't do that anymore," said the young woman behind the counter. The look on her face and emphasis on "anymore" underscored her real thoughts: "Just how old are you anyway?"

We had to laugh. Sure, we were a little sad that we had to settle for a canned Coke, not even a canned Cherry Coke. But we knew before we headed west that we'd find a lot of changes.

And at least we had each other to commiserate with, along with the memories of what "real" Cherry Cokes taste like.

Travelogue epilogue: If you missed any of my West Texas trip reports, you can find them here. So far, I only have six entries (counting this one), but I suspect I'll be culling this journey for blog fodder for a while.

So stay tuned. You never know when a financial lesson from my old stomping grounds might show up!