No, my hometown was not named for Kermit the Frog. It's a lot older than the genial green Muppet, named instead in 1938 for Kermit Roosevelt, the eldest son of President Theodore Roosevelt. 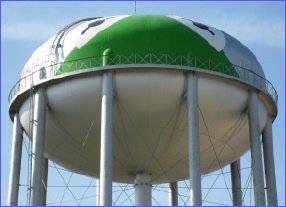 But ever since Kermit the Frog became so well-known, we've heard the question or comment or joke about the faux frog and the town's name.

So finally the town decided if you can't beat the ubiquitous amphibian, adopt him!

Last October, in celebration of his 50th showbiz birthday, the Muppet and his entourage showed up in Kermit, Texas, to kick off a worldwide hop across four continents and scheduled to last until the end of 2006.

And while he might visit some fancier places -- the tour includes planned stops at the Statue of Liberty, the Eiffel Tower, the Great Wall of China, the Johnson Space Center and a courageous appearance at a Frog Leg Festival in Fellsmere, Fla. -- I doubt any other place honored the Sesame Street star more.

Almost every resident, around 5,000, showed up to greet him and present him with the key to the city. He also was named grand marshal of the homecoming parade, crowned honorary homecoming king and the Dairy Queen served green French fries and ice cream that day.

I didn't make it back for Kermit's triumphant tour of Kermit, but as Kathy and I tooled about town this week, his presence is still felt. He peers down on the town from the water tower. (Now that picture above makes sense, doesn't it?).

Windows are still painted with his likeness, like this group of three at the local police station.

A street even was renamed for the fuzzy fellow: 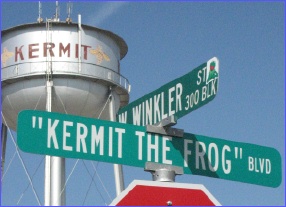 So now when people ask about my hometown's connection to Kermit the Frog, I can truly say that while he's not the reason for the name, he's an honorary resident.

Heading west: Kermit was the first overnight stop on our tour. We also briefly visited the San Angelo area, popped by Wink and cooled our heels in Pecos. More on those places later.

As for our finances, we've found gasoline a tad bit more expensive, lodging quite reasonable and food incredibly inexpensive, which might be good for our pocketbooks but not for our waistlines!

Next stop, the mountains of West Texas. If our motel there has an Internet connection, I'll let you know how that goes. If not, I'll check in when we get back to Austin on Monday.